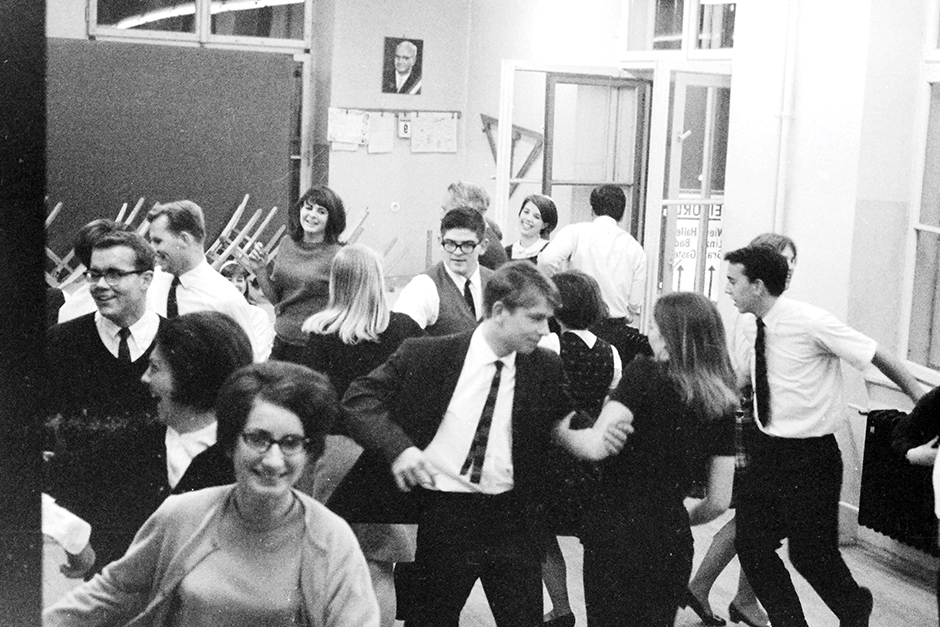 Rev. Henry Dittmar was a history professor at the U of R from 1948 to 1978; this is a photo of a Salzburg student dance in the 1960s from his archive. Can you spot yourself?

In response to our photo from the archives on page 40 of the fall 2020 issue, Wally Pereira ’73 (Johnston) says, “That day has been very meaningful for me for the past 51 years. Oct. 15, 1969, was ‘The Moratorium to End the War in Vietnam.’ As I recall, this was the first anti-war demonstration at the U of R, and it was driven by those of us at Johnston College.

“At Redlands we decided to march to the City Hall from campus. We organized to have marshals (the students with black armbands) to keep everyone together. At the City Hall, we stood on the steps and read the names of the fallen in Vietnam. Each of us who chose to read were given 15 minutes to read the names published in the Congressional Record. We read around the clock until we finished all of the near 40,000 names.

“My 15 minutes were some of the longest in my life. I left the stairs shaken. So many names were in the pages already read, and so many more to be read! From my experience, the demonstration was disciplined and well-managed by the marshals. I also recall it was peacefully received by the community of Redlands.”

Anna Napoli remembers different aspects of that day; then a new professor at the University of Redlands and a six-week resident of Redlands, she recalls signs on some Colton homes saying “Traitors” and men with old-style video cameras recording the group’s progress. “Word was that we’d all earned a place on President Richard Nixon’s ‘enemies list.’ I stood quietly in front of the rebuilt First Methodist Church until the group dispersed, then walked up Cajon Street to Professor Jay and Jane Roberts’ house where I hitched a ride home.”

DJ Jensen ’73 says, “The whole Moratorium movement was spearheaded by Sam Brown ’65. No rumbles downtown, but Redlanders definitely gave us dagger looks. On a personal note, the summer before I left home in Ventura my dad informed me, ‘If I ever see you in an anti-war march, I’m yanking you out of college!’ Thank Buddha, sleepy Redlands did not show up on any TV broadcasts!”