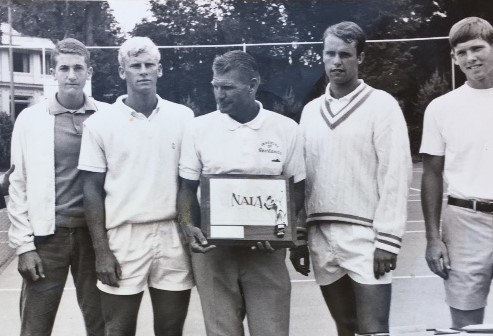 Seabury Stanton ’73 is writing a book to honor his mentor and friend Coach Jim Verdieck, and has graciously shared an exclusive preview of the first chapter with our Och Tamale readers.

James Edward Verdieck was the men’s tennis coach for the University of Redlands from 1947 through 1984. Over the three decades I knew him, the only person I ever heard call him by his first name was his wife, Fepi. She called him “Jimmie.” Other than that, as best I can tell, for the 50 years from the day he took over the coaching responsibilities for the men’s tennis team in 1947 until the day he died in March 2001, the rest of the world addressed him as “Coach.” He had two sons, Doug and Randy, who anchored the team from 1966 to 1972. I never heard them call him “Dad” once. Not once. He was always just “Coach.”

I am positioned across the net from Coach on a smoggy day in February 1970, a gangly, six-foot-six freshman from a little town in Massachusetts with a grand total of 19 years on the planet. Even though I have enough water behind my ears to irrigate an orange grove, there isn’t anything I don’t know. Just ask me.

Therefore, given my abundant life experience and my thoughtful evaluation of my first two months of practice with the University of Redlands men’s tennis team, I have determined I am clearly much smarter than this little old guy on the other side of the net. The fact that he has been coaching tennis here longer than I have been alive does not occur to me.

Coach is standing in the alley by the service line of Court Five, the teaching court. To the uninitiated, it is an unremarkable 60 by 120 foot faded green slab of fenced and lined asphalt. But this is hallowed ground. The epicenter from which all things flow. Where the man who is on his way to becoming the greatest intercollegiate tennis coach in history grinds and toils with single-minded determination to carve foolish young boys into the very best athletes, and, by extension, the very finest young men they can possibly be.

He is dressed in a white, collared Bulldog Tennis shirt and white shorts. There is a coffee stain on his shirt. His white socks have collapsed into unruly bunches around his ankles. His face is chiseled and browned to a crisp from a lifetime in the sun. Perched on his head is a maroon baseball cap emblazoned with a white R. And perched on top of that, finger-rolled into a crude ball, is a well-chewed wad of green Spearmint gum.

“Just storing it for later.”

“Why don’t you just break out a new one?”

“Now, why would I want to waste a perfectly good piece of gum?” he smiles, and, as he does, his skin crinkles up around his eyes like a prize Chinese Shar-Pei.

He has a hawk’s beak for a nose, his reward for playing on the 1941 Stanford Rose Bowl team as an undersized 178-pound center in a leather helmet that offered all the protection of a paper bag. His untamed eyebrows sprout from his forehead in twin thickets of copper. They protrude like balconies over his piercing blue eyes, providing shade when he takes his cap off to scratch his head. Maybe it’s the offset of his weather-beaten tan, or maybe it’s the intensity with which they burn, or maybe it’s because I have unwittingly stumbled into the privilege of witnessing the human freight train that dwells behind them, but his are the most formidable eyes I have ever encountered.

I have just concluded a practice point by hitting a crosscourt passing shot wide, for the eighth time in the last 30 minutes, though I am completely oblivious to this fact.

Without a word, Coach places his gold Yonnex racquet on his teaching cart. Plucking the nub of the yellow number two pencil from behind his ear, he picks up a beleaguered clipboard that is suffocating beneath a tangle of papers so massive and barely constrained, the whole mess threatens to detonate in his face like a confetti bomb. He hovers his pencil over the top page, circles what he was looking for, and then calls me in. As he walks to the net, in the absence of any cartilage in either of his knees, his legs are so bowed he doesn’t so much walk as roll from side to side, like a dingy rocking in a passing boat’s wake.

Coach meets me at the net and explains for the fifth time, “Hit the ball down the line in that situation. That crosscourt angle is low percentage. Every time you go for that shot, you’re giving your opponent an absolute gift. You might as well wrap it up and put a ribbon on it. He doesn’t even have to hit the stupid ball.” He has not raised his voice. There is no hint of sarcasm. His is the voice of a teacher.

Coach tries a different tack. “How many times in the last 30 minutes have you tried that shot?”

I have no idea.

He glances down at the error chart he invented and where, unbeknownst to me, he has meticulously recorded every single error I have committed in the last 30 minutes. “Exactly eight times,” he says evenly.

“How many times did you hit the shot successfully?” he asks, as he discards the clipboard on a courtside bench.

I have no idea.

I find myself wondering how the heck he did the math in his head so fast.

Coach continues, getting more and more animated. He is in his wheelhouse. He is teaching. His shoulders begin rolling and twitching in service of his thoughts. His hands are moving every which way in a weird marionette dance. The skin on his hands and forearms is leathered from sun damage and his fingers are decorated with cylinders of white medical tape that cover raw splits in the joints.

“So apparently, you are not talented enough to hit that shot.” He delivers this information without malice, rather, as a simple matter of scientific fact. “Cripes, if you were that talented, you wouldn’t even be here right now. You’d be at UCLA on a full ride. But you’re not. So, we have to learn to work with what we have.” He takes off his cap, scratches his head, and puts the hat back on again. I tower over him like a freeway light pole, peering down at the dried gum ball on top of his head, wondering just how old that thing really is. “See, if we don’t have the God-given talent of the other guy, then we have to manufacture ways to win. We have to be mentally and physically tougher. And part of that is we can’t make dumb mistakes. We have to make the opponent hit another ball, and another, and another. And then maybe he starts thinking, ‘Boogerpoop, this Redlands guy just doesn’t miss.’ And then he starts thinking—”

Wait. What? Boogerpoop? Are you kidding me? Is this guy from freaking Mars?

“—starts thinking he needs to hit an exceptional shot. Next thing you know he’s the one making mistakes, and he’s getting all worked up.” Coach breaks into a pantomime. He stomps a few steps to the right, and then back again to the left, head down, shaking it side to side, hands waving in cartoonish dismay. “‘Cripes, this guy just keeps coming. What am I gonna do? What am I gonna do?’” Coach stops in front of me, turns and peaks up from under the brow of his cap.

“Consistency,” he says, and then a big Cheshire grin spreads across his face. Here it comes. the trademark close. The last stroke of the brush. Like Rembrandt’s signature at the bottom corner of The Return of the Prodigal Son.

And so endeth the lesson.