When the first coast-to-coast total solar eclipse since 1918 casts a shadow across our nation on Aug. 21, 2017, physics Professor Tyler Nordgren will be ready—camera in hand.

"I'm going to be at John Day Fossil Beds National Monument in eastern Oregon,” Nordgren told BBC News in a Feb. 18, 2017 article about the solar event, which will traverse a southeast path across U.S. 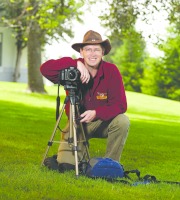 skies from Oregon to South Carolina. “By going out and looking at the sun we take part in a time-honored tradition of citizen science.”

BBC science correspondent Jonathan Amos interviewed Nordgren at the Annual Meeting of the American Association for the Advancement of Science (AAAS) in Boston. Nordgren presented a talk at the annual meeting about the eclipse and planned citizen science projects, such as the Eclipse Megamovie Project, which will create a time-expanded video of the eclipse using images submitted by the public.

“By going out and looking at the sun we take part in a time-honored tradition of citizen science.”