The puppy's moniker honors both tradition and change 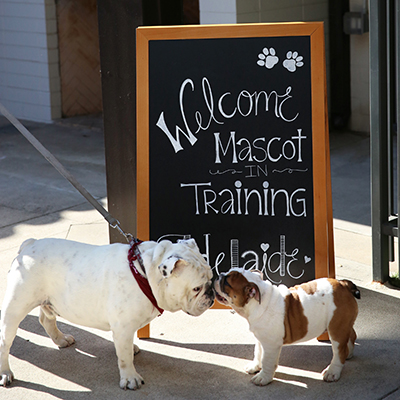 The University of Redlands recently announced a new twist on its live bulldog mascot tradition—for the first time ever, the mascot-to-be would be female.

With the historic move, the University broke the “glass kennel ceiling” but also introduced a dilemma. A long line of previous official mascots had been named after past presidents of the University, all of whom had been men. What should the proper moniker be for the now 10-week-old round ball of wrinkles and fluff who had been appointed the first female mascot-in-training?

The University decided to ask the community for help deciding among the top contenders, including:

On the morning of June 23, the more than 3,300 votes had been tallied and a small group of people gathered on the Redlands campus around a covered chalkboard to learn the results.

“We are here this morning for the big reveal,” said Shelli Stockton, U of R director of alumni and community relations. “We’ve had thousands of alums and students and friends of the university vote among a number of choices, all of which had to do with University history. We’re really appreciative of all the participation.”

As the puppy scampered into the audience, Thurber, U of R’s current seven-year-old mascot who will retire at the end of the 2017/18 school year, helped pull the covering off the blackboard to reveal the puppy’s name: Adelaide (“Addie” for short).

To enthusiastic applause, Stockton concluded, "Congratulations, Adelaide, you have a name!"

“We’ve had thousands of alums and students and friends of the university vote among a number of choices, all of which had to do with University history."