After graduating from the University of Redlands Johnston Center for Integrative Studies in 2015, Jake Rosenblum began searching for jobs to enhance his resume, with the ultimate goal of working at a brewery.

He found many American breweries require applicants to work on a production line for two years before assuming the responsibilities of a brewer. However, at Calvin Beer Company, a microbrewery in Hefei, China, he already met the job requirements of a brewer with his experience and understanding of the scientific brewing process—knowledge that he acquired at the University of Redlands as a Food, Sustainability, and Public Transportation major.

Rosenblum applied for the job in China, and the next thing he knew he was planning for a new adventure abroad. 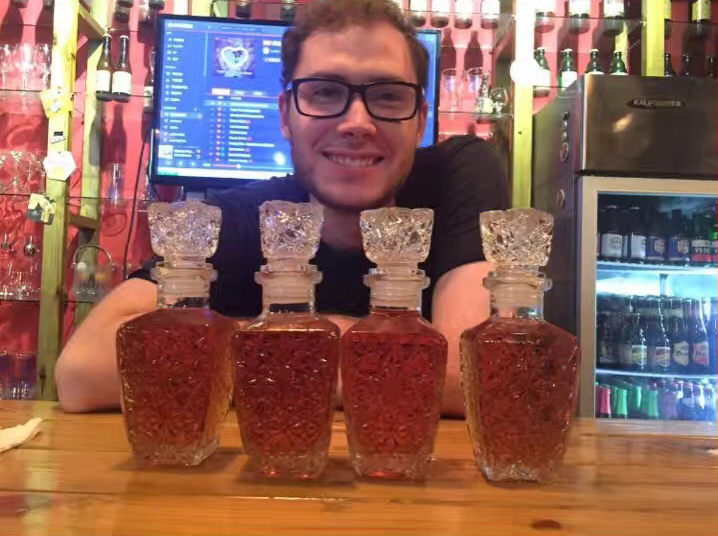 He credits the forward-thinking philosophies of the Johnston Center for his post-graduation success. “After I transferred to Redlands, another Johnston student told me that he was working with biology professor Ben Aronson to learn about home brewing,” he said. “We would brew every other week and earn credit for it.”

At the University of Redlands, Rosenblum also spent time traveling in Europe producing a short documentary for his final project. While abroad, he came to recognize the value of social cues and traditions of many different cultures—insights he continues to use in China.

“Part of my job is focusing on what people like to drink in Hefei,” Rosenblum says. “China has a face culture that revolves around quantity, and focuses much less on quality. So, the more beer a person has, the richer they seem to their friends.”

Now, Rosenblum’s average day varies from brewing and bottling beer to working with Chinese distributors. “I’m in charge of everything from the beginning of the brewing process all the way until the last label is put on the last bottle,” he says. “In the U.S., there are luxuries like cold shipping, but that doesn’t exist in China. Sometimes we have to distribute our beer on tractors.”

With no previous knowledge of Chinese, Rosenblum admits that life in China has its challenges. “People don’t speak standard Mandarin in Hefei,” he says. “They speak a variation of Mandarin that’s really difficult to learn.” He notes he has to get the language right for the shippers to send the right beer to the right place.

When he’s not working, Rosenblum spends time traveling to different Chinese provinces. “I spent Chinese New Year in a tiny village where people were setting fireworks off in the middle of the streets,” he says. “Learning about the social boundaries in the different provinces has been really interesting.”

As Rosenblum embarks on his second year in China, he looks forward to combining his international experience with his love for filmmaking. “I’m actually finishing a script for a film about the microbrewery scene in China,” he says. “Eventually, I want to work in an American brewery and ultimately open my own. But right now, it’s an adventure.”

“I spent Chinese New Year in a tiny village where people were setting fireworks off in the middle of the streets.”