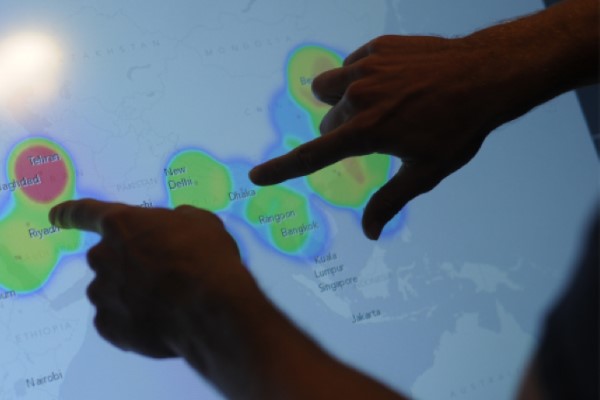 The Center for Spatial Studies will host a public showcase of geographic information systems (GIS) technology in honor of GIS Day, Nov. 16, 2016, at the University of Redlands.

ns of new and emerging technologies, plus a variety of hands-on activities. Participants will be able to play in an augmented-reality topographic sandbox, use a giant touch table to "soar" over campus, and test their campus map savvy for a chance to win a prize.

Poster sessions and demos begin at noon in Lewis Hall. The Tomlinson Prize for Excellence in GIS will be awarded at 12:30 p.m. by UR President Ralph Kuncl and Esri co-founder and CEO Jack Dangermond during a ceremony in the outdoor Brown Amphitheatre. There will also be a special GIS Day Colloquium at 4 p.m. in Gregory Hall, featuring Major Individual Projects presentations by six MS GIS students:

GIS Day was established in 1999 by Esri as a grassroots educational initiative to provide a forum for users of GIS technology to demonstrate real-world applications that are making a difference in our society. The annual, global event brings universities, government agencies, schools, nonprofits, and GIS professionals together to build GIS knowledge in their communities.