When Sean Dunnington ’19 first drafted his list of college choices, the University of Redlands was not on it.

An aspiring playwright and screenwriter, he focused on schools in New York and Los Angeles that catered to one or the other of his passions. Yet a visit from Kevin Dyerly, vice president for enrollment, showed him how a Redlands education could offer opportunities to nurture both creative pursuits.

“Deciding to go to school near L.A. or near New York was almost like choosing between screenwriting and playwriting—because of Hollywood and Broadway,” Dunnington says. “The Johnston Center is one of the biggest reasons why I chose Redlands, because it has an open curriculum that allowed me to study playwriting and screenwriting, which was very cool.”

He was nominated for, and received, a Hunsaker Scholarship, a highly competitive award that meets a student’s financial need for all four years at the University

At Redlands, Dunnington enrolled in the Johnston Center for Integrative Studies program where he is pursuing an emphasis in “Visual and Dramatic Narrative.” He also got involved in the Theatre Arts Department—acting in several of its productions, including Big Brother Hamlet—and the University of Redlands Artists’ Collective (URAC), which supports student-run productions. 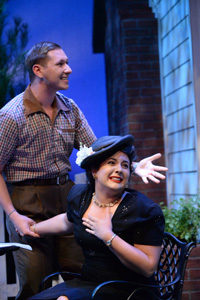 Dunnington serves as URAC’s publicity chair and has acted in several of the club’s plays, including Rocky Horror Picture Show and Ha, Ha, Redlands, for which Dunnington wrote a comedy sketch.

“A dear friend stated in a writing exercise that her mom was her soulmate and I couldn't get that out of my thoughts—a family member being your soulmate,” he says. “So I wanted to write about it.”

After multiple drafts and revisions, his story emerged about a brother’s disappearance and a sister who hopes to find clues to what happened by reading a journal he left behind.

“The story is about being lost and looking for the other,” he says. “His sister is hoping to find answers in the journal, but ends up finding other things she didn’t intend on discovering.”

Encouraged by the play’s reception at Redlands, Dunnington followed his sister Marena’s recommendation to submit the play to the Fresh Grind Festival in New York for consideration. Flat Fish was chosen—from about 300 entries—to be one of the festival’s 10 staged readings.

In January 2017, his play was featured in a public, staged reading at the Theaterlab in Manhattan as part of the Fresh Grind Festival hosted by Black Coffee Productions.

“This is exactly why I chose to study at the University of Redlands,” Dunnington says. “It’s a school where I could have the opportunity for a play I wrote to be produced on stage. Having my work performed in New York, near Broadway, was a dream come true.”

This is why I chose to study at the University of Redlands—It's a school where I could have the opportunity for a play I wrote to be produced on stage. Having my work performed in New York, near Broadway, was a dream come true.”