For born-and-raised-San Diegan Nancy Soukhavong ’18, it was important to find a school in her hometown. But when she discovered the undergraduate business program at the University of Redlands San Diego campus, she realized she also wanted to go abroad.

After deciding to enroll in the University of Redlands' business program, Nancy was quickly convinced she would study abroad. “I was lucky that one of my first professors was Allison Fraiberg,” she said. “After hearing her story about studying abroad, I was sold—but I didn’t know which trip I would take.” 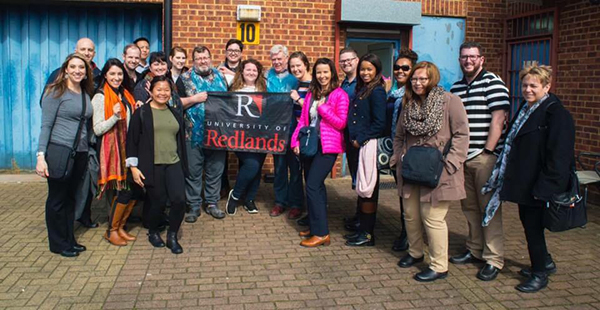 Nancy and her classmates in front of Wilde's Cheese on Tottenham Enterprise Day.

Following in her father’s footsteps, Nancy had taken French in high school. “My dad had told me that he had learned French,” she said. After he passed away, she used traveling as a way to continue to feel connected with him. “That’s how I decided to go on the UK-Paris trip.”

While overseas, Nancy and her classmates met with large-scale banks and insurance companies and continued to develop skills in risk management and auditing services. “We went to RSM International where one of our alumni is the CEO,” she said. “It’s one of the largest auditing firms in the world.”

The trip made Nancy realize that she could have the best of both worlds. “Eventually, I would love to work domestically, but also have the ability to travel overseas. After I finish my master’s, I want to look for a job with both capacities,” she said.

During her time on the University of Redlands San Diego campus, Nancy has enrolled in the mentorship program there and hosts happy hour mixers for other students. But a highlight for her was her induction into the Whitehead Leadership Society, an organization that encourages leadership and academic excellence within the University of Redlands School of Business. “That really showed me that people notice the little things you do every day,” she said.

“It’s the first time I’ll be traveling by myself overseas,” she said. “But traveling gives me a confidence that I wouldn’t get anywhere else.”

"Traveling gives me a confidence that I wouldn’t get anywhere else.”