A Johnston Center for Integrative Studies student with an emphasis in urban development and the president of the Associated Students of the University of Redlands (ASUR), Kamal Bilal ’18 decided to add another title to his resume: entrepreneur.

As the final project of a May Term class in 2015, the Chicago native presented a business plan outlining his ambitions to start a summer camp for disadvantaged youth from Chicago’s South Side. A few months later, he had raised enough money with an online GoFundMe campaign and other sources to create a free weeklong program for 40 kids called Eye Love You Summer Camp.

“Growing up in Chicago, I saw how segregated the city actually is and that a lot of people don’t have access to basic amenities,” says Bilal. With that in mind, Bilal and a staff of 20 local teenagers took action to create courses for campers to talk about financial literacy, self-empowerment, multicultural history, and nutrition. After being inundated with camper applications during the first year, last spring Bilal and his team were able to raise additional funds and expand the camp to include 50 children, enrich its program, and extend its length from one week to four.

Short-term and long-term benefits of attending the camp include an increased ability to navigate food deserts (areas lacking in fresh fruit, vegetables, and other healthy whole foods), an escalation in mindfulness and self-esteem, and the growth of financial planning skills.

“I had always thought about being an entrepreneur in the past, and I learned a lot by launching Eye Love You,” says Bilal. “It takes a lot of organization and a great team—the little details really matter.”

Bilal notes that the support for Eye Love You came from both Redlands and Chicago communities. “The staff at the camp is mainly made of people I knew from high school, but a lot of the fundraising money came from University of Redlands students and staff members,” he says.

Bilal’s entrepreneurial spirit is what led him to attend the University of Redlands and enroll in the Johnston program. “Two friends from my high school came to Redlands and were Johnston students. I was really attracted to the fact that I could create my own emphasis and have control over my education,” he says.

Looking forward, Bilal hopes to stay in the greater Los Angeles area and eventually expand Eye Love You to Southern California. “Right now, I’m working to secure nonprofit grants so we can have more funding,” he says. “I’d love to bring the camp here and serve a new demographic.” 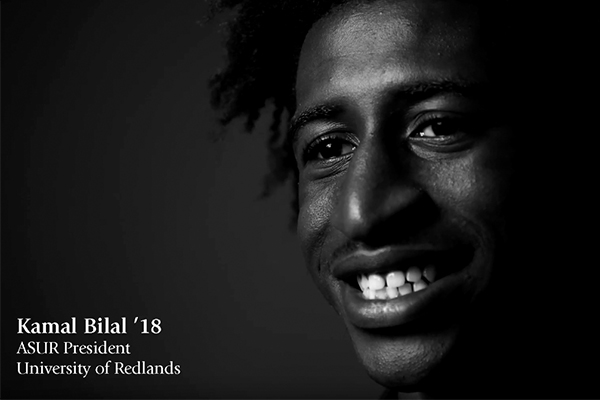 “Two friends from my high school came to Redlands and were Johnston students. I was really attracted to the fact that I could create my own emphasis and have control over my education."