George, the eighth Bulldog mascot for the University of Redlands, has arrived! A handsome pup with chocolate fur, a spotty ear, and bright blue eyes, George is showing that he's a Bulldog with real swagger.
Still settling in at home with his handlers Joe Modica and Candice Stewart, George will spend the next several weeks assimilating into his new community and training for his Mascot role. Follow George on social media (@urmascot) for updates, announcements, and future scheduled appearances.
Why George?
His name honors our University's fifth president, George Henry Armacost, who spent 25 years in leadership at Redlands from 1945-70. During his tenure, the University experienced incredible growth in the student body and infrastructure. Key programs including Study Abroad, Salzburg Semester, and the Johnston College were launched under his leadership. George and his wife, Verda, remained active in the Bulldog community after his retirement.

George spent his first day on campus exploring and napping. 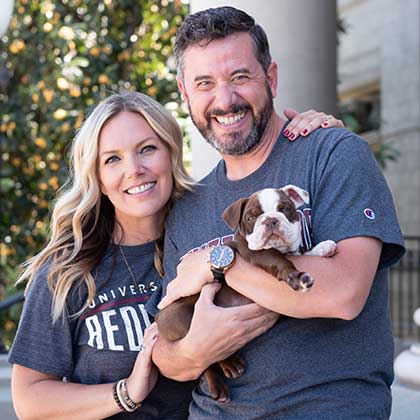 Learn about Joe and Candice

Email George to request an appearance. George will begin scheduling appearances in August.