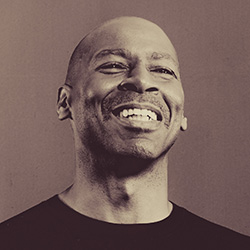 Acclaimed guitarist and composer Kevin Eubanks is perhaps best known for his 15-year run as music director for Jay Leno’s The Tonight Show Band, where he played with prominent musicians across genres.

A Philadelphia native from a musically accomplished family (including older brother trombonist Robin, younger brother trumpeter Duane, and uncle pianist Ray Bryant), Eubanks began playing violin at the age of 7, then added the piano, trumpet and guitar. He started playing at jazz clubs when he was 13. After studying at the Berklee School of Music in Boston (1976–1979), he auditioned for and won a spot with Art Blakey’s Jazz Messengers, then toured Europe with the group. Upon his return, he moved to New York and worked with musicians including drummer Roy Haynes, trombonist Slide Hampton and saxophonist Sam Rivers. In 1983, he started leading his own groups.

Eubanks recorded his debut solo album with Elektra in 1982, then moved to GRP Records, producing seven albums with that label, including the 1988 Shadow Prophets, which received more radio airplay than any other jazz recording that year. In 1991, he signed with Blue Note Records and released albums including Turning Point (1992), Spirit Talk (1993) and Spirit Talk 2: Revelations (1995).

In 1992, Eubanks began playing for the new house band on The Tonight Show and wrote the show’s closing theme, "Kevin's Country." In 1995, he became bandleader, a position he would hold until 2010.

Eubanks’ career now spans more than 100 albums, including his newest release on Mack Avenue Records East West Time Line (2017). He has also composed music for movies and documentaries. He has been a guest on television shows including Hollywood Squares, Muppets Tonight, Days of Our Lives, Royal Pains, The History Channel and Oprah’s OWN.

In addition to teaching at the Berklee College of Music, Banff School of Fine Arts in Canada, Rutgers University and the Charlie Parker School (Peugia, Italy), Eubanks has taught several guitar classes at the master’s level for the University of Redlands.