U of R community reflects on legacy of Martin Luther King January 21, 2022

Throughout the third week in January, University of Redlands students, staff, and faculty participated in an array of events organized by U of R’s MLK Steering Committee to remember the life and legacy of civil rights leader and activist Martin Luther King Jr. This year’s theme was based on the final book that King wrote, Where Do We Go from Here: Chaos or Community?

“It is important for the U of R community to celebrate the legacy of the Rev. Dr. Martin Luther King, Jr., because our nation continues to struggle with what Dr. King asked of America throughout his public life,” says Senior Diversity and Inclusion Officer Christopher Jones. “America continues to struggle with creating true equality in its society, or, as Dr. King said, with living out the true meaning of its creed.”

“Inequality comes in many forms. As an institution of higher education, we must continue to teach our students to think critically to take on the inequities that continue to exist in our society. The lessons of the Civil Rights Movement are still meaningful today. We must not only continue to study those lessons and take time to remember Dr. King, but also continue to apply those lessons as we take on the challenges that rise to meet us each day.”

As a result of the recent COVID-19 surge caused by the Omicron variant, many of the week’s events were adapted to an online modality. Still, participants were able to reflect on King’s work and legacy virtually during the annual Dr. Martin Luther King Jr. Service, which was hosted by the Chaplain’s Office and the School of Music.

“This year would have been Dr. King's 93rd birthday, and this year, in ways beyond our imagination, we face new challenges to his dream and to much of what he accomplished,” said Chaplain Emeritus John Walsh. “What we have been able to achieve is now being seriously threatened.”

Students Magaly Vargas ’23, Carlos Chavez ’23, and Jay Arroyo ’24 read excerpts from King’s speeches, which were followed by virtual performances from the U of R Chapel Singers, encouraging participants to reflect and prepare to spend the week studying and discussing King’s work.

Toward the end of the service, Mentone Congregational Church Pastor Rudolph Dimery offered his perspective: “Martin Luther King Jr. would be saying, ‘Love one another. Work together for the common good, find peace in the face of discontentment.’ He would say to the politicians, ‘Work it out...make it work for the good of us all.’ He would say to the preachers, the rabbis, the priests, and to all religious leaders of all faiths, ‘Live out the true meaning of your creed. Tell the truth and challenge your people.’”

For the second year in a row, the School of Education’s Center for Educational Justice hosted the Day of Dialogue. The event featured three different panel discussions about racism and white backlash, which were based on chapters from King’s Where Do We Go from Here: Chaos or Community?

Before the first panel discussion, President Krista L. Newkirk noted that until we as a country take the steps necessary to dismantle inequities, we will remain a nation divided.  She then announced the creation of the University’s Anti-Racism Commission, a group that will continue to advance the goals and objectives outlined in the University’s anti-racist statement that was released in November 2020.

After noting several statistics about the disenfranchisement of Black Americans, Newkirk offered hope for the future: “We can educate in an honest and culturally-inclusive manner... We can have days like this, where we challenge ourselves to do better. And we can follow through on what we say we will do to work on these issues.” [An audio recording of Newkirk’s remarks is available below.] 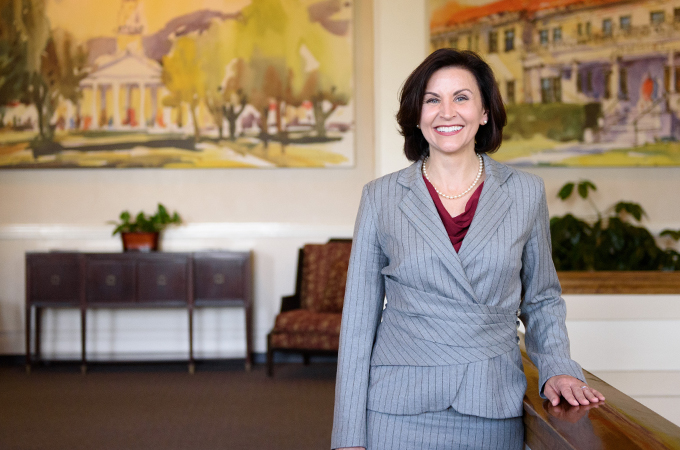 Each of the three panels featured a unique perspective: students and faculty; staff; and educators and activists from the greater Redlands community. All three groups spoke about experiencing a sense of relevance while reading King’s book and thinking about his work. Students spoke about their experiences on campus and faculty members identified areas where progress was still needed.

During the staff conversation, panelist and Associate Director of Corporate and Foundation Relations Anuradha Diekmann ’19 (MBA), ’24 (Ed.D.) said that she was taken by how pertinent King’s words are, even five decades after they were written. While she admitted feelings of sadness and frustration from this realization, Diekmann also noted her commitment to progress: “In my role, my work is to find funding that supports the institution, faculty, and students. So, very directly, looking for funding that supports students of color, underrepresented minorities, those pursuing STEM [Science, Technology, Engineering, Mathematics], Indigenous populations...  strengthens these populations.”

Toward the end of the event, School of Education Naslund Endowed Dean Mario Martinez thanked the event’s panelists and participants, noting that an important vehicle for progress is partnering with other groups and organizations within the community.

Martinez remarked: "Your participation in this event means that we are working together to take joint responsibility for the social, cultural, and educational wellbeing of our communities, our families, and children, as we consider ways that we can realize the ideals that MLK offered us. The mark of a great university is assuming such shared responsibility.”

Throughout the week, University community members were encouraged to participate independently in a campus peace walk. At three of the five stopping points along the route, participants scanned QR codes to experience contributions from the campus community.

At the first stop, School of Education Associate Dean and Professor Nicol Howard prompted listeners to continue to ask difficult questions in the spirit of King’s activism. “We should continue to raise those basic and uncertain questions about our national character, and we can do so with a focus on community and love,” she said. “While the fact that we can ask these questions today reminds us that there is still a need for radical restructuring of the architecture of American society, many continue to seek the answers with a spirit of hope, and often even issue calls to action.”

A second QR code that walkers scanned revealed an art piece by Black Student Union copresident David Hazward ‘22. In his artist statement, Hazward said he drew inspiration for the piece by asking himself who he sees at the forefront of the fight for justice.

Student Ayesha Morrishaw-Ashley ’23 took time to participate in the walk alongside Interim Assistant Director of Campus Diversity and Inclusion Peter Tupou. Throughout the week, Tupou was thinking specifically about income inequality and its effects on various populations across the country.

“I think if Dr. King saw the issues of poverty and income inequality that exist today, he would be greatly disappointed,” he says. “When MLK was murdered in Memphis, he was fighting for higher wages for Black sanitation workers there. I would attest that his ‘I have a dream’ speech was not just a rallying cry for equality for all people, but a call for an end to economic inequality and to demand the right to gainful employment for all. Overcoming poverty is another approach to overcoming racism, disparities in health, education, and the criminal justice system.”

Morrishaw-Ashley appreciated Tupou’s company during the walk, which came at a time fueled by stressors from the COVID-19 pandemic. She says it was important to her as a Black person to participate in the walk to spend time thinking about King, because she was influenced by and often reaps the benefits of his work.

“[The walk] made me think about the future,” said Morrishaw-Ashley. “Especially after seeing David’s piece and listening to Nicol speak. The fight for equality and equity in this country is not done... it makes me think about what is left in our future, how we can advance toward progress, and who will be the next influential person in our country.”

Learn more about Campus Diversity and Inclusion and racial equity resources at the U of R.