In the early months of 2020, University of Redlands Women’s Assistant Volleyball Coach Kierra Jones was in between athletic seasons. She spent her workdays reviewing video footage of past games, developing practice plans, and talking with recruited student-athletes. As she was gearing up for the spring season, the COVID-19 pandemic started to take off. At first, she didn’t realize how much of an opportunity the pandemic would give her to flex to meet the community’s needs.

In early March, Jones, like the majority of the country’s population, remembers feeling as though the spread of the novel coronavirus would be under control by the summer. Jones and Head Women’s Volleyball Coach Lisa Lindberg focused on making the most of what might be the team’s last practices of the semester. As students were sent home and campus closed, the National Collegiate Athletic Association (NCAA) announced that upcoming seasons and championships were canceled.

“We had no idea what was going on, but I remember us wanting to make sure that our student-athletes were okay and were able to make it home safely,” she says. “That was our main priority.” 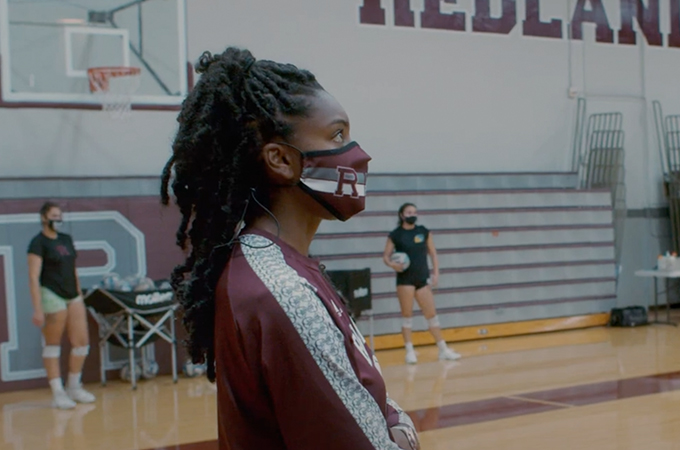 The health and wellbeing of student-athletes weighed on Jones’s mind throughout the summer and into the fall, when the majority of assistant coaches were furloughed. But in January, the assistant coaches were asked to come back—with the added responsibility of joining the Student COVID-19 Case Team as case managers and contact tracers.

Jones didn’t think twice about joining the team: “This really matters,” she says. “We want to keep our players and University safe.”

She was joined by the full-time assistant coaches for other Redlands athletic teams:

At first, the team members were all learning together as they went through training—it was a very collaborative process. Now, Jones and the other primary case managers dedicate 20 or more hours a week to their contact tracing duties, which, as the Centers for Disease Control and Prevention describes, involves using clear protocols to notify, interview, and advise the close contacts of patients with confirmed or probable cases of COVID-19.  When she is assigned a case, she conducts a 45-minute video call with the person who reported it, follows up with a summary of the call via email, and then continues to check in with the reporter every 48 to 72 hours throughout their quarantine.

After moving from the Midwest to assume her position at Redlands, Jones knows what it’s like to be alone in an unfamiliar place and wants students to know they’re being thought of throughout their time in isolation.

“If a student sounds like they’re having a tough time, I try to conduct more follow-ups by calling and texting more frequently,” she says. “I give them advice on what they can do during isolation, and I try to be as comforting as possible. We were prepared for the worst, but luckily our students have been limiting their contacts and the places they visit on campus, so we’ve had a low number of cases.”

Still, it takes a large amount of time to conduct an interview, write a follow-up report, conduct check-ins, and ensure that those in quarantine have the food and supplies they need. Jones and her fellow case managers make sure such requests are fulfilled and problems resolved.

Director of Athletics Jeff Martinez has watched in awe as the group members have taken their new responsibilities on in stride. “What has made this transition successful is that these coaches have become experts in COVID-19 management—they can speak the language,” he says. “When their head coaches, staff members, or students had questions, they are able to answer them and move us forward.”

Being a part of the Student COVID-19 Case Team has given Jones an optimistic outlook on the future of athletics and higher education—she’s comforted by seeing the system work and hopes that other universities will be able to follow Redlands’ lead.

Jones is also glad to be back on the volleyball court. In accordance with NCAA COVID-19 guidelines, she and Lindberg began hosting practice on the U of R’s outdoor sand volleyball courts as the majority of the team has returned to campus.

In addition to working on the team’s physical conditioning, Lindberg and Jones are also mindful of players’ mental health. Along with supplying them with yoga mats, foam rollers, lawn games, and other supplies to use in their residence halls or while socially distant, the coaches gave each player a journal with prompts that address the importance of mental health and leadership skills. Jones, who has worked to establish a daily routine and create boundaries with herself in order to improve her mental health during the pandemic, is leading by example.

Looking forward, Jones is eager for every team and university’s safe return to the league. While she knows that some of her favorite aspects of athletics—a full gym of cheering fans, a sweaty mid-game team huddle—might not return for a while, she finds solace in the commonality that exists between being both a coach and a contact tracer.

“Just like we need teammates to win our games, we need everyone to wear a mask, wash their hands, and do their part,” she says. “It only takes one person to lose the game, and the same is true in the pandemic. We’re better together.”

Learn more about Bulldog Athletics and the University of Redlands’ COVID-19 response.