As a child, Kolby Ratigan ’21 always tried to figure out how things worked. He would spend his time building small-scale models of buildings and other structures and later became interested in how environments can tell stories and provoke emotions. When it came time for him to choose a college to attend, he looked to the University of Redlands and its Johnston Center for Integrative Studies. 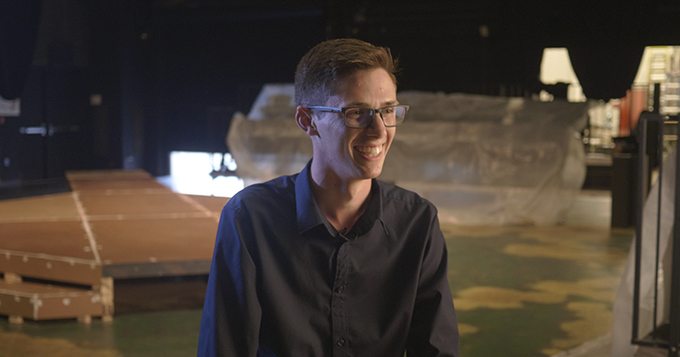 As a Johnston Center student, Ratigan has designed his own curriculum around an emphasis of themed entertainment design, which combines aspects of art, engineering, and technology. In the process, he has created theme park attractions, cultural and museum exhibits, and theatre production sets and has taken the University’s interdisciplinary approach to education in stride.

“I like changing my mindset as I go from class to class,” says Ratigan, who, last semester, was enrolled in spatial studies, environmental science, art, and theatre courses. “I’ll go from using geographic information systems (GIS) software to examine oil spills in one class to sculpture, where I can use my hands to make a three-dimensional form. It’s all connected in some way and feels well-rounded.”

Ratigan first realized he wanted to diversify his academic interests during his first-year seminar, a course on interpersonal mindfulness taught by Professor of Psychology Fred Rabinowitz. Originally unsure about the premise of the course, which required being vulnerable and talking about students’ individual personalities, he admired Rabinowitz’s ability to put class participants at ease. Ratigan asked Rabinowitz to be his advisor and has since used the professor’s course recommendations to broaden his scholarly horizons.

Being able to interact and work closely with faculty is one of the experiences Ratigan has enjoyed the most during his time at the University. “The openness that professors have to students has really surprised me,” he says. “They’ve considered adjusting syllabi or have been flexible with assignments and have allowed me to specialize my learning environment. In addition to topics covered in class, I can speak with professors about my personal life and goals for the future.”

Ratigan’s schedule is split between the classroom and independent study sessions, which have allowed him to work on a number of Theatre Arts productions. Over the past three years, he has been the assistant scenic designer for two plays, a prop designer on two more, and most recently worked as a lead designer.

He always looks forward to the creative process at the beginning of a new show. “Going in as a designer, I have to think about how the writer wrote the story, and I get to play off of that with the setting for the production,” he says. “After my preliminary designs are down on paper, I jump into 3D modeling to see how they’ll feel spatially. After that, I draft them out and see if they’re practical for the space. After spending months designing a show, I get to walk into the theatre and see it come to life—nothing comes close to that feeling.”

In addition to his work on campus, Ratigan has found his place in the industry of themed entertainment design professionals. Last summer, he worked as a creative intern at The Hettema Group, a design firm in Pasadena, California, where they design and create theme parks, attractions, cultural exhibits, and experiences.

Ratigan notes that he brings the knowledge he has acquired at Redlands, both personal and professional, into his experiences off-campus; he feels prepared for a future as a show designer and, eventually, a creative director.

“I have my career path ahead of me, which feels very solid,” he says. “But I also know more about other topics—psychology, environmental science, spatial studies, art, business—that I wasn’t expecting to learn about, but that allows me to bring more to the table as a person and employee. At the University of Redlands, I wasn’t always learning from a textbook—a lot of my knowledge stems from my experiences.”

Learn more about the Johnston Center for Integrative Studies.