University of Redlands celebrated a landmark victory this week when Women’s Lacrosse Coach Suzette Soboti captured her 200thcareer-win at the University. The win made her the fourth coach at Redlands to reach this milestone during this school year, joining Football Coach Mike Maynard, Women’s Basketball Coach Rich Murphy, and Men’s Soccer Coach Ralph Perez. 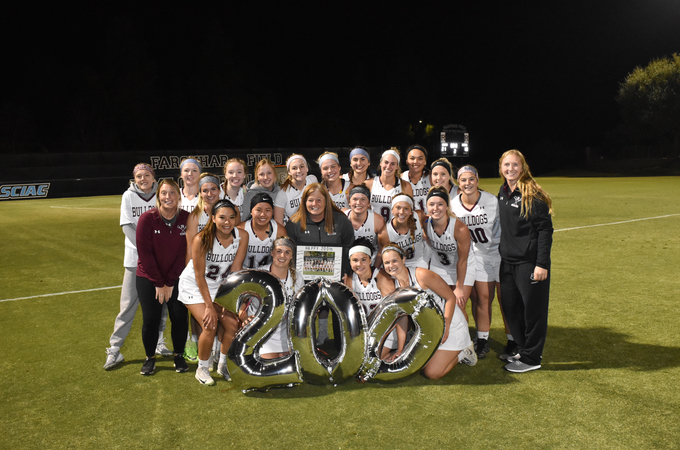 Remarkably, this is the second 200thcareer-win for Soboti, who also surpassed that high bar several years ago coaching Bulldog women’s soccer.

“The overarching philosophy or mission of Bulldog Athletics is for our coaches to provide a highly competitive athletic experience that allows student athletes to continue their passion and match that with a high-quality academic experience,” says Director of Athletics Jeff Martinez, who also notes the culture of teamwork, community, and mentorship in U of R’s 21 NCAA Division III programs. “We're really fortunate to have the longevity and the commitment in our coaches that we have.”

Soboti secured her lacrosse 200thcareer-win on Feb. 26 in an exciting home game against Whittier. The Bulldogs started slow, trailing early in the match by a score of 1-5 before rattling off 14 straight goals to lead 15-5 before allowing their opponents another score.

“Maynard, Perez, Murphy, and Soboti have now joined an elite group of Redlands coaches, past and present, who have reached this [200 win] milestone previously,” says Associate Director of Athletics Rachel Roche. “But to watch them do this in a single academic year is truly amazing. As they lead their teams into the next decade, we celebrate their commitment to the Bulldog student athlete experience.”

Learn more about athletics at the University of Redlands.