On October 17, the foyer of Ann Peppers Hall transformed from a concrete passageway into an art piece, full of vibrant color.

The piece was a collaborative installation conceptualized by artist Fulgencio Lázo, a Seattle-based printmaker and painter. Together, Lázo and members of the University community created a traditional Oaxacan tapete. A tapete, which translates as “rug,” is a Oaxacan-style sand painting representing an indigenous tradition used to mark many types of special events. Today, tapetes are most associated with the observance of Día de los Muertos.

Artists typically design the tapete around themes of commemoration, indigenous symbolism, skeletons, and other images. A foundation of sand is formed for the overall design, which is then decorated with powdered pigments, stencils, and flowers.

U of R Professor of Art Anna Gaitan, a Chicana artist whose research focuses on Mexican and Chicano/a artwork, spurred the project after Lázo’s son, Matias Lázo-Fanning ’20, mentioned his father’s artwork during one of her lectures. With the help of Lázo-Fanning, Gaitan reached out to Lázo and began talking about the possibility of an installation on campus.

As Gaitan and Lázo began to formulate the idea for the project, Lázo visited campus to explore potential locations and was captivated by the windows in the art building. Gaitan and Lázo both wanted the installation to be a collaborative one that created an opportunity for those who weren’t art majors to participate in a creative endeavor. Lázo often invites others to work with him so that he can share Oaxacan traditions.

Working in four, 90-minute shifts, a group of 41 students, faculty, and volunteers spent six hours constructing the installation out of 1,500 pounds of sand. 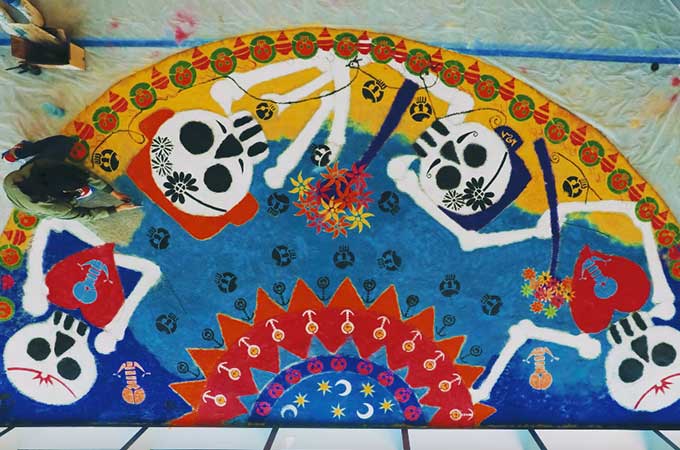 “People often stop themselves from creating because they’re afraid of failing,” says Gaitan. “But most artists want people to understand that the opportunity to make things or express yourself is really important. Fulgencio and I wanted people to experience that.”

For the tapete, Lázo chose to commemorate the children who have died in United States Immigration and Customs Enforcement custody since 2016. Students from Gaitan’s printmaking class worked to honor specific children with papel picado—“picked paper”—a traditional art form similar in appearance to Tibetan prayer flags. These pieces of colored paper hang above the tapete, adding another dimension to the installation.

When the installation was completed, Lázo took time to speak about his personal journey as an artist, discussing the installations, paintings, and sculptures he made in the process.

Gaitan believes it’s important for all students to experience art from around the world. Recalling her own time as a student, she says her Chicano/a professors were key to her education and personal growth. She hopes that international experiences, such as Lázo’s installation, have a similar impact on her students and looks forward to holding similar events in the future.

“It’s important for students to study different cultures in art so that they can connect with a visual language,” she says. “When students learn about things that they can relate to, they feel as though they belong and form a deeper connection with art and each other.”

Learn more about the University of Redlands art department.