Deaf activist shares his story at the U of R October 7, 2019

On October 1, model, actor, and deaf activist Nyle DiMarco visited the University of Redlands. During the public event, which was co-sponsored by the Associated Students of the University of Redlands (ASUR), Diversity Initiatives, and the Johnston Center for Integrative Studies, DiMarco told his story in American Sign Language (ASL), while a translator spoke alongside him. The crowd filled the seats of the Memorial Chapel.

“There has been a big demand from students to host a person from the deaf community,” said interim Director of Diversity Initiatives Monique Stennis. “We’re very proud and excited to have Nyle visit our campus.”

As he told his story, DiMarco illustrated how challenges in his past paved the way for future success. 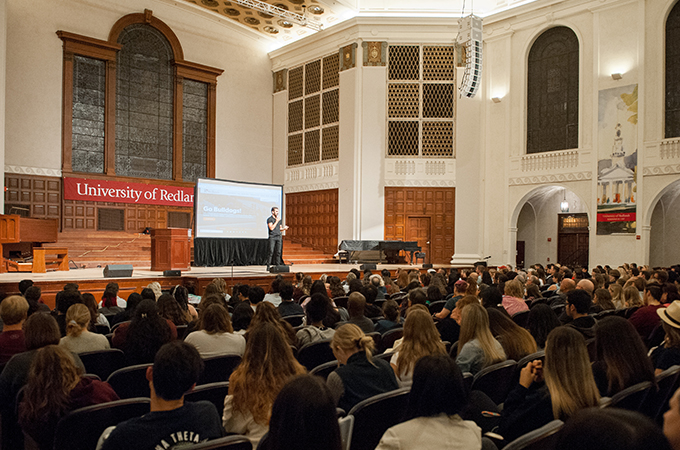 As a child growing up in a deaf household in Queens, New York, he would find ways to leave his hearing aids behind on the way to school.

“I went to the same deaf school that my parents and grandparents went to,” he said. “At the time, New York didn’t have the greatest deaf education, so, when I was six or seven, I could sign better than my teachers because it was my first language. Can you imagine being able to speak your own language better than your teacher?”

At the time, he said, the assumption in education was that students needed to hear in order to learn. When his family moved to Maryland, DiMarco gained entry to an all-deaf school. “It was a utopia,” he said. “I had finally found a place I could thrive.”

DiMarco went on to attend Gallaudet University in Washington D.C., a university that offers programs and services specifically designed for deaf and hard of hearing students. At first setting his sights on a career as a math teacher, as commencement approached DiMarco started to second guess himself. He decided to take a year off after graduating to backpack through Europe.

“I was backpacking and staying in hostels, wanting to meet members of the deaf community wherever I went,” he said. “During that time, I learned that only two percent of deaf kids had access to an education taught in their own language. I realized how privileged I had been and how much access I had had to resources that helped me succeed.”

After DiMarco returned from Europe, he began to work as a model and received offers to film America’s Next Top Model and Switched at Birth. Winning America’s Next Top Model—the first deaf person to do so—led to an opportunity on Dancing with the Stars. These triumphs didn’t come without a fair share of challenges, DiMarco noted, including being bullied and doubted because of his deafness.

“I decided to change my mindset,” he said, “and my positive attitude is what enabled me to win,” he said.

In 2016, he created the Nyle DiMarco Foundation, an organization that aims to provide access to resources for deaf children and their families.

DiMarco’s work in the entertainment and nonprofit sectors aims to empower deaf people to tell their stories authentically. At the end of his Redlands appearance, he taught the audience two signs: “love” and “yourself.”

Learn more about ASUR, Diversity Initiatives, and the Johnston Center for Integrative Studies.