On October 29, former Los Angeles Laker Metta World Peace donned a University of Redlands t-shirt and walked onto the Memorial Chapel stage on the main Redlands campus. After retiring from his 19-year professional basketball career in 2017, World Peace—formerly known as Ron Artest before changing his name in 2011—has filled his schedule with speaking engagements to talk about his life and advocate for access to mental health services.

For the duration of the event, which was sponsored by Diversity Initiatives, Director of Athletics Jeff Martinez and School of Education Counseling Professor Janee Both Gragg spoke with World Peace about his childhood, athletic career, advocacy, and the stigma surrounding mental illness. 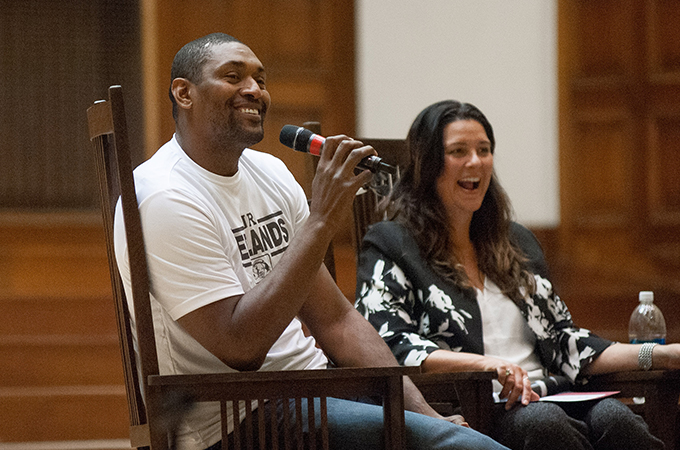 Growing up with nine siblings in Queensbridge, New York, World Peace started playing basketball early and learned many lessons from the game. He said that developing his athletic skills in a neighborhood plagued by gang violence and drug trafficking made him a better basketball player.

World Peace cites his father and the drug dealers in his neighborhood as his mentors during his teenage years. His dad introduced him to the game of basketball, and the drug dealers made sure he stayed on the court. “It might sound strange,” he said, “but they were the ones who kept me off the street and made sure I wasn’t selling [drugs].”

His mother was another important person in his life because she taught him that seeking help to overcome mental and emotional challenges was not something to be ashamed of. As an adolescent, World Peace was able to consult counselors and therapists, accepting early on the positive role psychology could play in his life—something he said he feels very lucky to have done.

After being drafted by the Chicago Bulls at age 19, World Peace played for five different National Basketball Association (NBA) teams, including the Indiana Pacers, Sacramento Kings, Houston Rockets, Los Angeles Lakers, and New York Knicks. Making the transition from collegiate-level athletics to a professional career took its toll on World Peace, who remembers his body being on the court but his mind being at home, with his family.

“I had this huge opportunity to take care of my family, and I didn’t want to mess that up, so I would self-destruct,” he said. “I definitely had three different personalities at that time, and it was hard to listen to them all at once.”

While he developed a reputation as one of the league’s best defenders, he was also involved in a number of on-court altercations—one of which resulted in an 86-game suspension, the longest in NBA history.

In the months following the altercation, World Peace made a deliberate decision to tame his intensity. After prioritizing his mental health, he learned to manage his emotions and no longer took what happened on the court personally.

In 2010, World Peace was a key player in the Lakers’ championship game, scoring the final three-point shot and leading the team to victory. In his post-game interview, he thanked his psychiatrist for teaching him how to relax. Shortly after, he auctioned off his championship ring and gave the $650,000 proceeds to nonprofit organizations that provided mental health services.

“When we ordered the rings, I asked for a size eight, even though my ring size is 14, because I knew I wanted to use it to raise money to benefit mental health services,” he said. “When I look at trophies and awards, all I see is what could have been. I only want to move forward.”

In 2011, World Peace was honored with the J. Walter Kennedy Citizenship Award, which is given annually to an NBA player, coach, or staff member who has demonstrated a commitment to the community. Joining a list of recipients that includes Magic Johnson, Steve Nash, and Kevin Garnett, World Peace says that this acknowledgment was the most meaningful to him because it recognized that he had made an impact.

In the years following World Peace’s post-game championship interview, other NBA players, such as the Cleveland Cavalier’s Kevin Love and Toronto Raptors’ DeMar DeRozan, have spoken publicly about their struggles with mental illness. Last month, the NBA implemented a new rule that requires each team to have at least one full-time licensed mental health professional on staff.

Following his remarks at Redlands, World Peace took questions from the audience, answering inquiries about current songs on his playlist and who he would pick to play on his dream team.

Reece Koe ’20, a member of the men’s water polo team, asked World Peace how he coped with the end of his athletic career—something Koe will soon have to face. World Peace responded with sage advice: “Always have something to fall back on that’s fulfilling and makes you happy.”