Last week's University of Redlands Theatre Arts fall production, She Kills Monsters, was directed by Stelle Salsbery ’20, a Johnston Center for Integrative Studies student. Katie Olson of the Bulldog Blog sat down with Salsbery to talk about the evolution of the performance and the joys of directing.

Bulldog Blog: What is She Kills Monsters about?

Stelle Salsbery: Without giving too much away, the play is about a woman, Agnes, who has lost her family due to a car accident. She finds a Dungeons & Dragons module that her sister has left behind. Through playing the module and experiencing the game and the characters, she learns about her sister and begins to process the grief of losing her family. 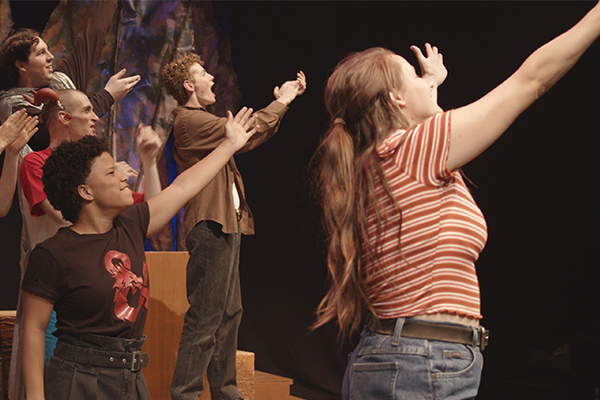 BB: How are student productions chosen?

Salsbery: Last spring, the department approached me and one other student who will be directing in spring 2020, and they gave us three options picked from a suggestion box. We read all three and then I chose She Kills Monsters.

BB: What drew you to this specific play?

Salsbery: It has a really amazing balance of joy and having fun with deep, thoughtful moments, and I thought that would be really interesting. The way the script is written is complex, yet very human and very real.

BB: Is this the first production you’ve directed? Have you always wanted to be a director?

Salsbery: Yes, this is the first full show I have directed. I didn’t know I wanted to be a director, actually. I came to college thinking I wanted to study music and environmental science, and then rediscovered how much I care about plays. After taking Chris Beach’s directing class last fall, he recommended me to direct. I feel as though I’ve really found my stride with it.

BB: How did it feel to be recommended to direct the play?

Salsbery: It was really overwhelming at first. But it’s also really exciting because not a lot of people get to direct on their own before going to grad school.

BB: What have you learned from directing the production?

Salsbery: The play analysis is really important. Part of how I learned how to direct is with this big nine element analytical process to research the context and subtext of the play, what the characters are trying to do to each other, and how they communicate. That gives us enough information to make staging decisions. I definitely learned that people respond well to confidence and positivity. Even if you’re not sure about something, if you say it with confidence and focus on bringing out the good things, progress happens really quickly.

BB: How does directing She Kills Monsters play into your academic and career trajectory?

Salsbery: This is my capstone project. Throughout the process, I’ve incorporated different things that I’ve learned—we put sign language into the show, and I spent time thinking about social forces and sociology and theatre conventions. Trajectory-wise, I’d like to work for a theatre company that goes into communities and helps people tell stories that heal or educate. There’s a need for directors at those kinds of companies.

BB: What has been the most rewarding part of directing the production?

Salsbery: The most rewarding part has been getting to know the cast, because there were some people who I didn’t know very well. Building connections with them and building a small community of people who know that they can trust and lean on each other was important to me.

BB: How has being a Johnston student influenced your theatre arts experience on campus?

Salsbery: I’ve benefitted most from the interdisciplinary aspect of being a Johnston student who is interested in theatre. The outcome goals of self-advocacy and negotiating that Johnston promotes have really helped me collaborate with other people—I have to negotiate with designers and all the people on the production team to make sure that everything works.

BB: Do you plan to direct more plays in the future?

Salsbery: Yes, I definitely want to direct more. This has been a safe way to test the waters because I had a full support system. Now I feel more confident to go out on my own.

Learn more about theatre arts and the Johnston Center for Integrative Studies at the U of R.