Last week was the best week ever: the new University of Redlands students moved in, and I finally got to return to my mascot duties!

New Student Orientation Week kicked off on Wednesday when the new students arrived. I suited up with a GoPro action camera and trotted over to Hunsaker Plaza to meet everyone. I got so many pats on the head, I was worried I might end up with a concussion, but it was worth it to see all the students’ and parents’ smiles.

The weather was in our favor on that day; I’m not too good at math, but I’m 105 percent sure it was the coolest move-in day ever. I couldn’t really help the new students decorate their rooms since I don’t have thumbs, but I was there for moral support—and to look pretty, of course.

When I got hungry, I headed to the Quad for a free lunch—being a mascot has its perks! I relaxed in the shade, and my mom (Mary Littlejohn) snuck me some watermelon.

Later on, I mingled with some of the University’s head honchos at the President’s Welcome Reception. I forgot my bow and cape at home, but, luckily, the event wasn’t formal. I wanted to make friends with a service dog at the reception, but I knew I couldn’t distract him from his job—honestly, it’s more important than my job!

I would’ve gone to Convocation, but didn’t want to steal the spotlight. More importantly, I really needed to take a nap. It was such a long day, and it wasn’t even over yet! After the sun went down, I followed all the new students to the Administration Building so we could get our class picture taken. I was front and center! What can I say? The camera loves me.

After getting a good night’s sleep, I made my acting debut in Och Tamale LIVE. I made an appearance in not one, not two, but three shows in Glenn Wallichs Theatre! I was a little nervous, and I’m really glad I didn’t have any lines—I probably would’ve forgotten them! I mainly just had to stand there and look pretty, and everyone knows I’m great at that.

I wanted to go to the Glow Wild party later that night after the new students finished learning about all the academic programs on campus, but my mom said I couldn’t stay out that late. If I could put an eye-roll emoji here, I totally would.

On Friday morning, I went to the Academic Fair, where students had the opportunity to talk with faculty and current students to get more in-depth information about majors, minors, and everything in between. The students lined up to take photos with me, and I’m pretty sure we broke a world record for the number of selfies we took together.

And then, it was finally Saturday night: time for the big football game! First the students had dinner and played all kinds of games to get into the Bulldog spirit, then we headed over to Ted Runner Stadium—boy, was it packed! Everyone was decked out in maroon and grey, so very proud to be Bulldogs, and someone’s mom even brought me treats. The best part was when the cheerleaders let me stand on a cheer box; since I am a natural cheerleader, I felt right at home. Our football team crushed George Fox, 20-12

I can say with the utmost confidence that New Student Orientation Week was a success, and I hope all the new students had as much fun as I did! I’m so glad to be back at work, bringing smiles to everyone’s faces every single day. I can’t wait to see what the rest of the school year brings.

Don’t forget to check out my awesome GoPro footage below! Just add videographer to my résumé. 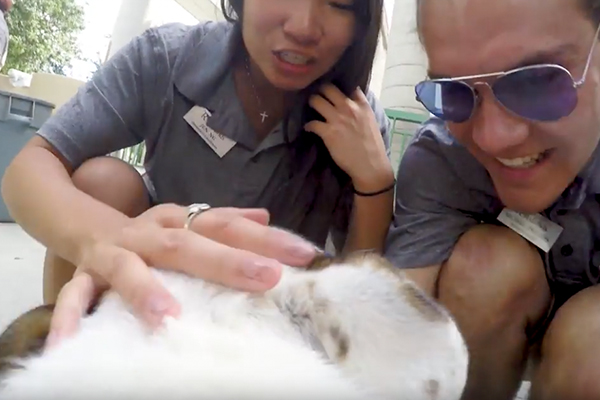