Earlier this semester Dolores Huerta, a longtime American civil rights activist, labor organizer, and 2012 Presidential Medal of Freedom winner, spoke at the University of Redlands after a screening of Dolores, a documentary about her life.

The film illustrated how Huerta remains one of the most impactful, yet overlooked, giants in American civil rights history. Huerta’s work is often misattributed to Cesar Chavez, with whom she co-founded the United Farm Workers union. For example, it was Huerta, not Chavez, who created the “Sí se puede” chant later used by Barack Obama as a campaign slogan in his successful 2008 presidential bid.

At the event, Huerta underlined her belief in the power—and responsibility—of ordinary citizens: “The one thing I learned from organizing is that we as individuals have the power to make changes,” she said. “And we cannot wait for someone to do it for us.”

Huerta’s accomplishments reflect this conviction. Throughout the years, her activism helped improve labor conditions for Latinx farm workers through better safety regulations, sanitation, and accessibility to drinking water and bathrooms, as well as the termination of the use of some toxic pesticides. Today, as founder and president of the Dolores Huerta Foundation, she continues her work to develop leaders and advocate for the working poor, women, and children.

During the question-and-answer session, one man stated he was from the Central Valley and, with tears in his eyes, thanked Huerta for improving conditions at his job.

Also in the audience were University of Redlands students, including Montserrat Pineda ’22, who had recently organized the March for Our Lives movement in Long Beach. “I would like to say thank you, gracias,” Pineda said to Huertas. “You have been my inspiration since I have been young . . . There are not many Latino women who take action in their communities, and I looked up to you, and I appreciate everything that you have done for our people. You inspire me each and every day.” 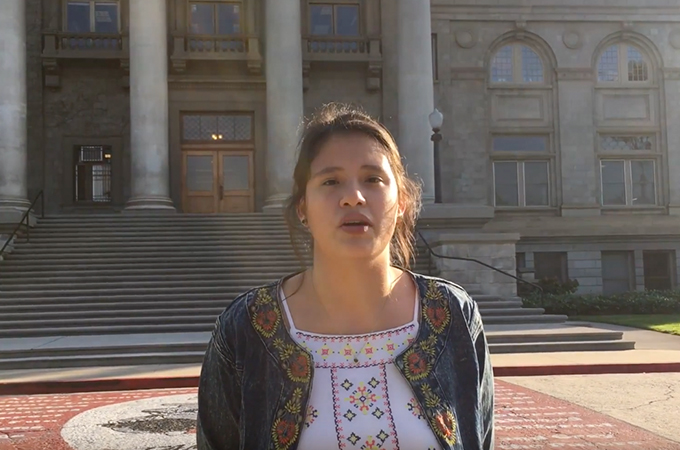 Pineda went on to ask Huerta what advice she would give to Pineda and other first-generation students and children of immigrants.

”I think that you, and people like yourself, are going to save this country,” Huerta responded.  “There's going to be a tsunami of young people who are going to go out, organize, do what you're doing, recruit other young people. As I said today, please get involved in the elections that are coming—that's a really important thing for you to do."

“I also want to say to all of the women in the room that we have to change our education system to make sure we teach our young women that they have to be strong, that they can be equal to men,” she continued. “We have to change our system so that young women know that they have to support themselves, that they have to protect themselves because Prince Charming does not exist. To the women out there, sometimes there's a position that opens up, or there's a job that we might want to get, but we think, ‘Oh, I don't think I'm quite ready for that job. I'm not really qualified.’ Just do it like the guys do—pretend that you are, O.K.?”

The event was sponsored by the Esri Forum, Town & Gown, Campus Diversity and Inclusion, the Office of Alumni and Community Relations, and a variety of academic departments. Learn more about upcoming events at the University of Redlands.