California politics is an always-changing landscape, professor finds May 30, 2018

by Strategic Marketing and Communications staff

A bookworm from an early age, Renée Van Vechten always knew research would be an important part of her world.

“I’ve been a researcher from the time I was 8 or 9 years old,” Van Vechten remembers. “I could have set up a bedroom in the public library I was there so much.”

The University of Redlands professor of political science is author of the textbook, California Politics: A Primer, used in college American government classes. Van Vechten says she also is finishing a longer, more comprehensive version with richer detail.

An honors student in high school, she recalls that her government teacher originally sparked her interest in studying political science: “He was a history enthusiast who inspired us to dig deeply into the causes of world events. He was a fervent anti-Communist who would teasingly refer to us, his students, as ‘pseudo-intellectuals.’”

In addition to her interest in California politics, Van Vechten holds a leadership role on the governing board of APSA (the American Political Science Association) and is an active scholar of teaching and learning, a research area concerning best practices in higher education. She also studies the politics of reform, which includes term limits and changes to electoral systems.

“As California has matured,” she notes, “there has never been a shortage of fascinating developments. Part of that is a function of a population of almost 40 million people. We are the sixth-largest ‘country’ in terms of our GDP, and we would be among the most diverse nations on earth—one of every four people was born outside the U.S.”

Van Vechten notes California has come into its own as the state has grown. “In other states, California is known for being an outlier,” she says, “and our nearly $200 billion budget, unusual primary system, and hyper-diversity are examples of what sets it apart. However, what I show in the book is that when it comes to government, we actually share a lot of characteristics with other states.”

One thing notable about California and some of its neighbors (including Colorado, Oregon, and Washington), she points out, is the initiative process, which supplements the other branches of government. At election time, the electorate is the fourth branch of government, voting on laws proposed by fellow citizens or “checking” the legislature through the referendum process.

Once she earned her doctorate, Van Vechten wanted to remain close to her roots in the San Diego area. Thirteen years ago, she was invited to Redlands for an on-campus interview, and before it was over she realized that she was “in love with the place.”

“Even to this day when I return to campus after a break and I climb the stairs in Hall of Letters, my mind goes to that line, ‘I’m home again,’” she declares.

Van Vechten appreciates the fact that Redlands faculty members care about students to an uncommon degree. “There is a sense that students should be empowered to take charge of their education,” she notes. “We try our best to create an environment where opportunities are available to stretch students’ minds in different ways.”

Watch this video to learn how the midterm elections can lead to a divided government. 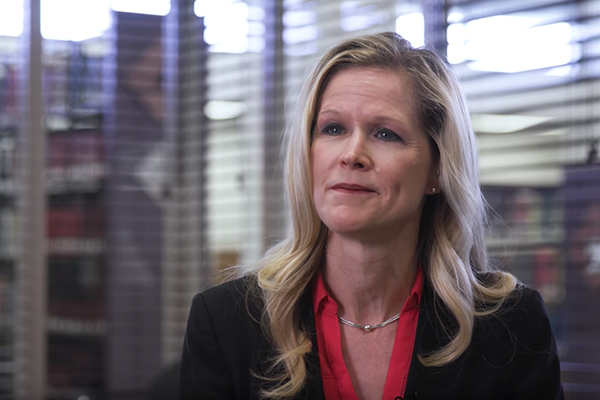 To learn more about Van Vechten and her work, see her faculty page.