The show Divisive Landscapes, created by Salt Lake City native Sandy Brunvand, opened at the University Gallery on Wednesday. A reception featured free food, live music, and a talk from the artist herself.

Most of the nearly 150 pieces in the show are no bigger than 8x10”, and all are monotone landscapes. “I work in multiples,” said Brunvand. “Seriality. I want to explore things over and over and over, so that’s my M.O.”

The majority of the pieces include a line of typewriter text: headlines from The Salt Lake Tribune that Brunvand started collecting after Trump won the presidency in 2016. Chronicling the past year, the headlines range from TRUMP ORDERS END OF ‘DREAM’ to POLLUTION KILLS 9M EVERY YEAR.

“I find I cannot stop collecting headlines,” said Brunvand during her talk. “The New York Times and The Washington Post have great headlines, [which] are much juicier and more divisive, but I decided to stay true to my concept of only The Salt Lake Tribune.”

Brunvand went on to explain that Utah is a very red state, with Salt Lake City being a little more muted. She looks forward to the reactions Divisive Landscapes will receive when she exhibits her work there.

Divisive Landscapes will be on display at the University Gallery on Colton Avenue until Sunday, February 4. The gallery is open from 1–5 p.m., Tuesday through Friday, and from 2–5 p.m. on Saturdays and Sundays.

The previous evening, Brunvand’s husband, Dr. Erik Brunvand, director of computer engineering at the University of Utah, gave a talk titled “Drawing Machines” in Ann Peppers Hall, also on the Redlands campus. His talk introduced art, engineering, and computer science students to a “different” segment of the sculpture world: sculptures that make drawings.

“I’m very interested in things that make marks on some other medium,” he said. “In particular, I’m interested in machines or sculptures that, through their sculptural identity, make drawings as part of their artistic purpose.” 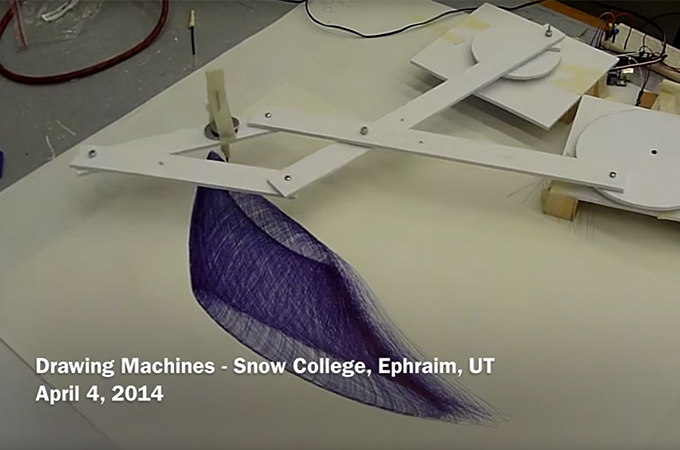 The next show to be featured in the University Gallery will be Professor of Photography Tommi Cahill’s Hypnagogia, which will open in February.