To call award-winning slam poet Joaquin Zihuatanejo’s appearance at the U of R on Wednesday a “poetry reading” would be somewhere between a dishonor and an understatement. Zihuatanejo put on a performance that might have been described as acting, had it not been for his authentic and multifaceted personality coming through in the stories he shared both in poetic form and conversational tone.

The poems Zihuatanejo chose to perform drew on the Chicano culture of the East Dallas barrio in which he grew up and prominently featured his family, primarily his grandparents, mother, and his father, who left when Zihuantanejo was a child. Lyrical and poignant, Zinhautanejo often opened and closed his poems by singing the first and last few lines, enclosing the hard-hitting core with contrasting softness. Some of his poems also included lines of Spanish, about which Zihuantanejo said, “If you don’t understand Spanish, don’t worry about it. Just feel it.”

Zihuatanejo credited his grandfather with being his first teacher. “I had to read out loud from novels, the Bible, William Blake, and Robert Frost, all these novelists and poets, in English,” said Zihuatanejo. “And then he would critique me on my reading abilities in Spanish.”

Zihuatanejo talked about the time he questioned his grandfather about this practice, recalling fondly that his grandfather said: “‘Mijo, little one, este barrio, this neighborhood, is surrounded on all sides by gangs, poverty, crime, and violence. When you’re inside the poem, when you are inside the book, you are safe, and none of that can hurt you.’”

Zihuatanejo announced he completed his MFA in May, and one of the products of his degree is his newest manuscript, from which he shared several poems that hadn’t been performed for an audience before. The book was sparked by the death of his father and is titled Arsonist. 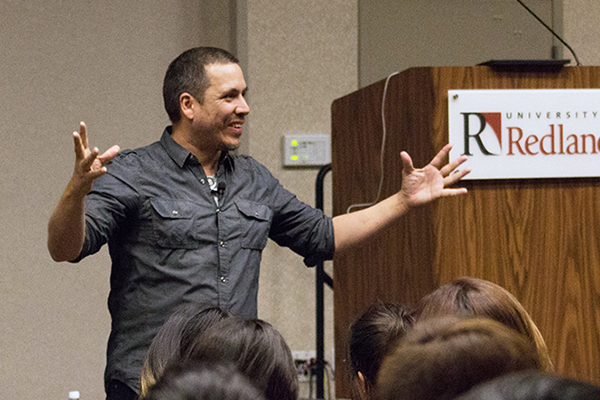