Like many traditions at the University of Redlands, Homecoming is a time-honored custom. Sure as the 33 words in the “Och Tamale” or the frequent attacks on Fairmont Rock, each year in October you can expect a weekend filled with talks, get-togethers, and a gridiron match-up in Ted Runner Stadium.

In many ways, this year’s celebration was one for the record books, and it left me with indelible impressions of sights, sounds, tastes, and touches.

I saw the maroon banners lining Colton Avenue, signaling a campus celebration was upon us.

I noticed a room filled with generous donors and the beneficiaries of their support (most of whom were student scholarship recipients) at the Celebrating Endowment Luncheon.

I watched a crowd join together to hear David Boies ’64, one of the most brilliant legal minds of our time, share his insights into our country’s challenges in a talk made possible through the Hall Network for Public Policy.

I observed alumni in their backyards along Frat Row, engaging with current members in the very same spots they called home as students.

I viewed alumnae from different generations at my own sorority’s Homecoming event— some just having graduated in the last year or so, others from decades ago—united in a common bond of sisterhood and Bulldog pride.

I took in iconic images of campus, displayed beautifully on the Chapel stage for the Forever Yours campaign launch.

Then I heard a voice-over beginning the spectacular tribute created by Marilyn Magness Carroll ’75 and Steve Carroll ’74 to mark this special occasion in our history.

I listened to laughter and cheers during the high-energy of the musical numbers (side note: who knew that so many of our faculty members had such dancing talent, showcased in a chorus line none of us will soon forget?)

I heard audible gasps of surprise and delight when Campaign Chair Alice Mozley ’70 announced the exciting news that a record $130 million had already been raised toward the $200 million goal—the most ever for a U of R campaign.

Then I smelled the intoxicating scent of fried chicken infusing through the air as attendees exited the Chapel, still holding the infectious excitement from the performance they just witnessed.

I tasted the lingering flavor of a buttermilk biscuit, as I joined more than 2,000 other alumni, parents, students, and friends on the Quad to share a delicious picnic meal.

Together, we savored the sweetness of victory, as our Bulldog football team defeated the Pomona-Pitzer Colleges’ Sagehens. Is there anything more invigorating than a home game victory, with a spectacular fireworks finale?

From Greek and athletic reunions to the SURF Garden Farm Day, from post-game parties to family pumpkin carving, this year’s Homecoming was a delight. But above all, I heard from numerous attendees how the weekend’s events touched their hearts, reminding them once again what they love about the University. 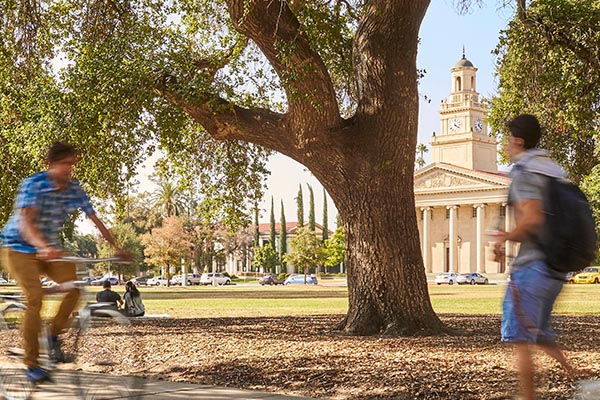 For more information about the Forever Yours campaign, visit https://www.redlands.edu/giving/forever-yours/