Surrounded by 200 of his closest friends and admirers, Thurber graduated from the University of Redlands on Monday. He was awarded two bachelor’s degrees in math and psychology, with minors in theatre arts and human-animal studies. Thurber passed away the next day, due to complications from an aggressive cancer.

Ben Galgano ’18 explained that when students in the class of 2018 found out that Thurber likely wouldn’t be able to graduate with them as originally planned, they sprang into action, organizing, in a matter of days, a special graduation event for Thurber in the Greek Theatre.

Galgano cited Thurber’s unending support of Bulldog athletics, whose representatives were onstage at the ceremony, showing their support of Thurber in return. Henry Stuckenschmidt ’18, a four-year member of the men’s swim and dive team, spoke on their behalf, saying, “All student-athletes can relate to changes in audience, from the big crowds to the small crowds, but Thurber was the one fan who was always there.”

Janise Rick, the application processing coordinator for Admissions who was also known around campus as Thurber’s Grammy, fondly recalled Thurber’s puppy days. “It is often said that the English bulldog has a face that only a mother, or, in my case, a grandmother, can love,” she said. “Oh, how true this is when you see a newborn bulldog puppy, the size of a Beanie Baby, with his face two-thirds the size of his whole body.”

Provost Kathy Ogren awarded Thurber his degrees, stating that because of his family connection to his handler Beth Doolittle, professor of math and computer science, Thurber is “rumored to have taken MATH-121 Calculus more times than any other student ever.”

“We are proud of you and your affiliation with the University of Redlands,” added President Ralph Kuncl, whom Thurber then bestowed with his signature high-five.

Of Thurber, Galgano summed it up, “You aren’t just a bulldog—you’re a whole University’s best friend.”

Watch a video from the ceremony. 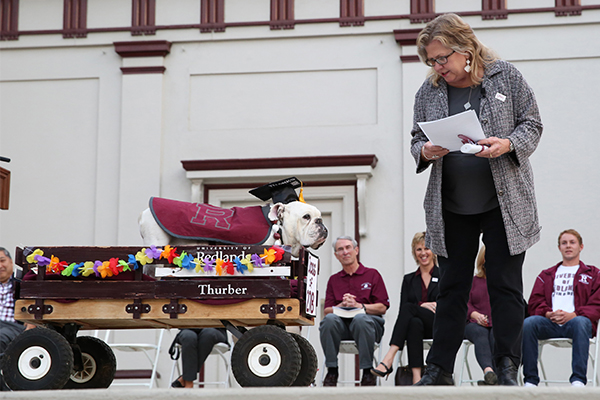 In a message to the University community on Wednesday, Thurber’s handler, Professor Beth Doolittle, stated, “It is with a heavy heart that I write to let you know that we lost our Thurber yesterday afternoon. I can’t thank you enough for the outpouring of love and support you have shown us, especially for the amazing Commencement the students organized on Monday afternoon. Seeing the hundreds of you there to thank him for his service to the University was absolutely incredible and, I can tell you, he could feel your love.”

Doolittle noted the University’s mascot-in-training, Addie, will begin to assume as many of Thurber’s mascot duties as her age will allow and will be officially installed as mascot at a home basketball game in January.

We will miss Thurber deeply, but I know we’re all glad we got to dedicate one last special day to the beloved mascot.

Note: This blog, originally published November 14, was updated on November 15, 2017.