by Strategic Marketing and Communications staff

Here are some recent accomplishments by our talented students and faculty, as well as recent recognitions for University of Redlands’ programs, operations, and staff.

Physics and mathematics double major Gal Dimand ’19 received a Ralph M. Parsons scholarship. Criteria for scholarship recipients include: majoring in a STEM field at one of the 16 private schools in California that offer STEM curriculums, having an above average academic record, and being engaged in the community or involved in extracurricular activities

Business Administration major Jacob Mara ’19 was selected as one of 30 undergraduate and graduate students statewide to attend the California Future Leaders Summit, sponsored by Campus Compact. The next conference will be held Irvine in January, providing access to valuable tools, resources, and networking opportunities designed to amplify the effectiveness of the next generation of leaders in the state of California.

The University of Redlands Trombone Choir was accepted by competitive audition to perform at the 2018 International Trombone Festival held at the University of Iowa in July. The choir will be premiering a new piece written by Alex Ehredt ’18, a School of Music graduate student. Mentored by School of Music Dean and Professor of Trombone Andrew Glendening, members of the group include Andrea Massey ’18, Joel Rangel ’16, Jonathan Heruty ’20, Michelle Reygoza ’ 20, Marcelo Aguinaga ’20, Ihab Hamideh ’21, Allysa Hannawi ’21, Esmeralda Gilman ’21, and Nicholas Bingaman ’21.

U of R Art Professor Raúl Acero won the President’s Office Purchase Award for his piece Recuerdos 2 at the recent Ink and Clay exhibition at Cal Poly Pomona. This national competition, established in 1971, features professional artwork in printmaking, drawing, ceramic ware, clay sculpture, installation and mixed “ink” or “clay” media. The President’s Award is selected by the Cal Poly University President for inclusion in the University permanent collection.

U of R School of Education Dean Andrew Wall has been named Ball State University Teacher’s College Alumni of the Year. Faculty from the College nominated him for the award and are hosting his visit to talk with students, alumni and friends of the College. Wall, who earned his master’s degree from Ball State, will travel to his alma mater in early January to receive the award.

The University of Redlands was selected by college guidance system Abound as a Top Degrees Grad School 2018 and Top Degrees Adult Undergrad 2018. U of R’s School of Business and School of Education earned the designations based on the quality, accessibility, and affordability of their educational offerings for degree-seeking adults.

As reported by Three + One, a municipal management services company, the University of Redlands earned a “cashVest® score” of 97 out of 100—the only institution that scored above 95 out of thousands of public and private institutions analyzed throughout the United States. A cashVest® score represents the health of an institution’s cash flow coupled with the optimization of cash available for investment.

In a Student Loan Report study using Department of Education data, the University of Redlands was ranked in the top 8 percent—#146 among 1,900 U.S. colleges with 500 or more students carrying student loan debt. A low default rate means students are graduating and handling their student loan debt successfully, a testament to the affordability and quality of a school’s programs. 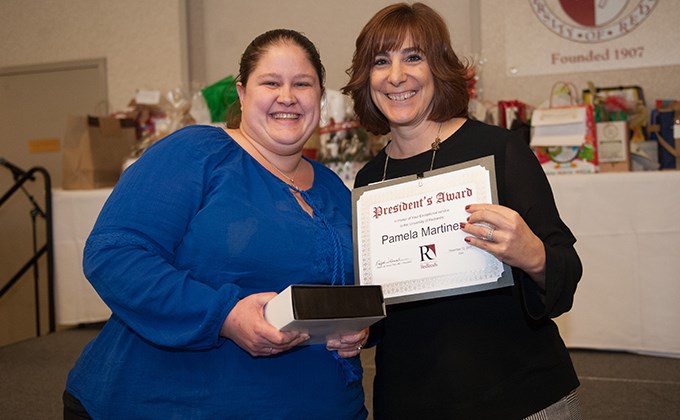 Recipients of the 2017 President’s Award, recognizing outstanding contributions by staff and administrators, were announced at a recent U of R Holiday Luncheon. This year’s winners were:

Who should we mention in our next Kudos Corner? Email your suggestions to bulldogblog@redlands.edu. Bulldog Athletics highlights will be covered in a separate post.