The Hall Network is pleased to introduce its Policy Speaker Series featuring visiting experts to the University of Redlands. These speakers will engage our community in key public policy questions facing the Inland Empire, Southern California, California, and the nation. 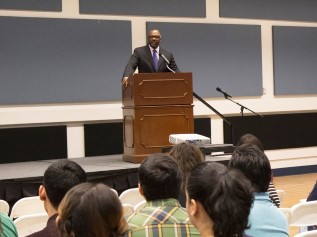 Peter C. Groff is the Principal and Chief Strategist at MCG2 Consulting, LLC. and is a noted education policy innovator, national policy and political analyst and leadership lecturer.

Groff has held senior level positions at all three levels of government and has more than 25 years of public service. He is currently serving as a policy and political consultant to numerous individuals and entities across the country. Before he began his consulting firm, Groff served as the first ever Visiting Fellow at the Johns Hopkins University School of Education.  Prior to his tenure at Johns Hopkins, he was the Director of the Center for Faith-Based and Neighborhood Partnerships at the U.S. Department of Education during the first term of President Barack H. Obama.  The Center was part of the White House Office of Faith-Based and Neighborhood Partnerships.  During President Obama’s second term, the President also appointed Groff to the White House Commission on U. S. Presidential Scholars.

Groff served as the 47th President of the Colorado State Senate and was the first African American in Colorado to ascend to the post, and only the third African American in the nation’s history to hold the gavel as State Senate President.  Senator Groff, who was renowned as the “Conscience of the Senate,” served in the Colorado General Assembly for nearly ten years and passed landmark and visionary legislation in the areas of education, criminal justice and health care.