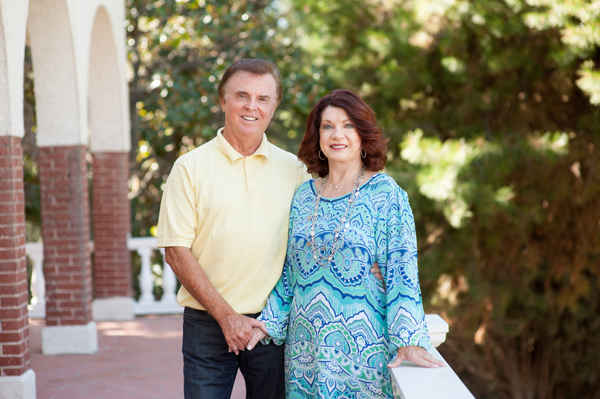 This used to be my playground

Because he grew up on East Campus Avenue, Tim Rochford refers to the University of Redlands as his “childhood playground.” Bestowed with an honorary doctoral U of R degree in 2015, Rochford has memories of visiting science labs, ceramics studios, Memorial Chapel, and Currier Gym as a youngster. “We were always exploring and wandering, but no matter where we went, we were always welcome,” he recalls. “The University’s threshold of hospitality gave us the best experience.”

He met the woman who would later become his wife in English class at Redlands High School. Relocating from a Wisconsin farm, Carol Rochford also grew up near campus: “The city of Redlands had such a nice atmosphere. When we came here, I thought we had died and gone to heaven.” The two did not start dating until after Tim returned home from Navy boot camp in 1965; the couple recently celebrated their 50th wedding anniversary.

Now living in Rancho Mirage, both Tim and Carol have a profound love for their hometown and stay in touch with many of their childhood friends. “Redlands is important to us, and our hearts never left here,” says Tim. In 2007, he learned of an opportunity to acquire the Burrage Mansion, a 20-acre historic property. “When I walked around the balcony, I didn’t have an exact plan,” he recalls. “But, I was already starting to envision how we could interact with the community and help children.”

The Rochfords eventually purchased the Burrage, restored it to its current awe-inspiring state, and turned it into a haven of play and enrichment for disadvantaged children. A bronze plaque at the Burrage states that the Rochford Foundation, which celebrates its 10-year anniversary this year, “joins a Redlands tradition of civic generosity.” The foundation—built on the principles of respect, compassion, and responsibility—embodies a mission to serve local underprivileged children.

True to this spirit, Tim and Carol worked with President Ralph Kuncl and University leadership to engineer a potentially game-changing new program, the Rochford Leadership Initiative. “We had many bright people around us that sensed what I had in my heart,” says Tim. Funded with a $1 million gift, the initiative has two key elements: growing educational leadership and increasing college access for disadvantaged youth.

One component, the Rochford College Access Program, mentors students from middle school all the way through college graduation. Launched recently in partnership with Redlands Unified School District, the program includes tutoring, weekend sessions, and a summer academy; fosters a supportive college-going culture at home and at school; and culminates in a $30,000 per year scholarship at the U of R.

As Tim and Carol walked the campus as children, their hope is that low-income youth who “could not even imagine attending a school like the University” will be placed on a track for future success. “The University has always been a source of pride for our town,” notes Carol. “Attending the U of R will open doors for these kids.”

“There are no words to describe how special it is for us to be involved with the community and the U of R,” says Tim. “We are on a great path, and we are so happy to be sharing it with the University.”

This article first appeared in the WINTER 2018 Och Tamale.