Moving Frontiers of Climate Change and Violence in West Africa: The Lebu Migrations of the 11th Century C.E. 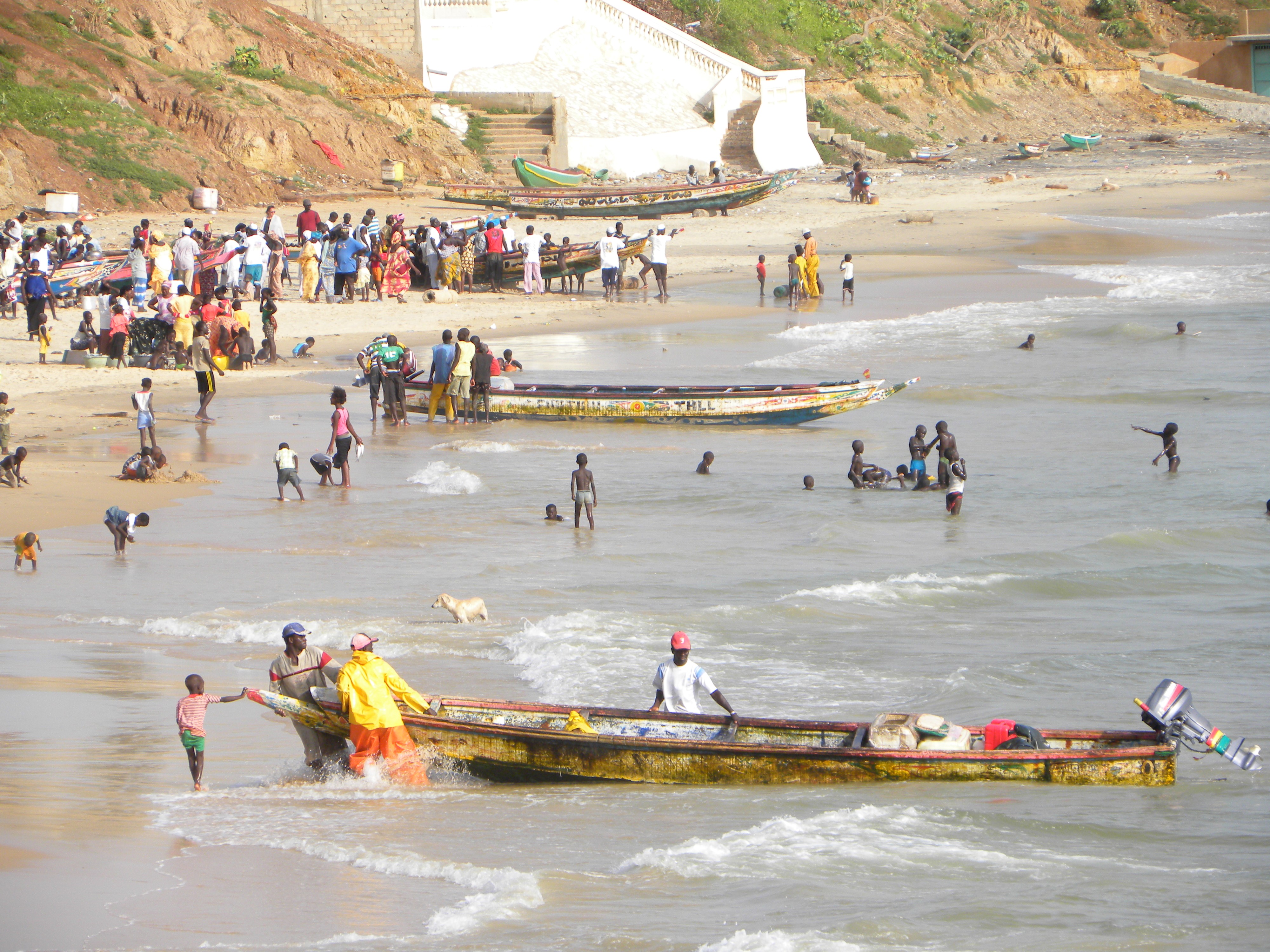 Today, the Lebu fisherfolk inhabit Dakar and the coastal towns and villages of Cap Vert in Senegal. According to multiple oral traditions from across the region, the ancestors of the Lebu originally lived to the northeast in the Hodh region of modern Mauritania and were forced to leave during the 11th century CE due to drought and warfare.  This research project blends different research methodologies and mapping to spatially analyze this initial stage in the Lebu migrations.  A larger study seeks to examine the creation of a Lebu historical geography extending from the Hodh to Cap Vert by focusing on the intersections between memory, space, and history.

The first waves of Lebu settlers arrived on the “Green Cape” as early as the late 16th century to be followed by later waves over the next two centuries.  The passage of various Lebu families and clans to Cap Vert can be traced backwards from the Atlantic coast across space and time by tracing the locations of villages founded by the Lebu.  Many of these sites are referenced in Lebu oral traditions but others were found by looking for Lebu family names imbedded in village names.  As one follows the village sites from Cap Vert to the north, one moves farther back in time. From the lower Senegal River valley, the trail of historic Lebu sites moves upriver, passing further back in time to the 12th century.  The valley, however, was only a midway point in the Lebu migrations

While the Lebu oral sources are extremely valuable they are limited.  Beyond the Senegal River valley, distinctly Lebu sites do not exist in their memory, but the local Berber oral sources speak of a prototypical population of farmers in the past called the Gangara that gave rise to many of the modern ethnic groups of Senegal.  Fortunately, Arabic written sources provide clues to the presence of this proto-Lebu population in the Hodh region.  Al-Bakri’s Kitāb al-Masālik wa’l-Mamālik published in 1068 is one of the most reliable of these sources and speaks of a population of black farmers, the Qanqāra (from which Gangara is derived), who lived in the highlands northwest of the commercial city of Awdaghust raiding passing caravans and fighting desert pastoralists.

Two archaeological studies, the first by Daveau and Toupet in 1963 and the second by Munier in 1974, located and mapped Gangara sites in the Hodh and the surrounding Tagant and Assaba highlands.  By georeferencing these maps, it was possible to place points for the

The climate and environment of the Hodh were very different 1,000 years ago when it was an economic and political center of power in West Africa. At that time, the Hodh was dominated by the commercial city of Awdaghust and Kumbi Saleh, the political capital of the Empire of Ghana. Following the model set out by James Webb in Desert Frontier that argued that the borders between climate zones were most prone to violence, I set out to examine the spatial relationship between climate change and violence. Researching historical climate studies, I have mapped the isohyets and corresponding ecological zones as they shifted south during the 11th century from a wet period which had begun c.700 to a dry period that set in by c.1050. 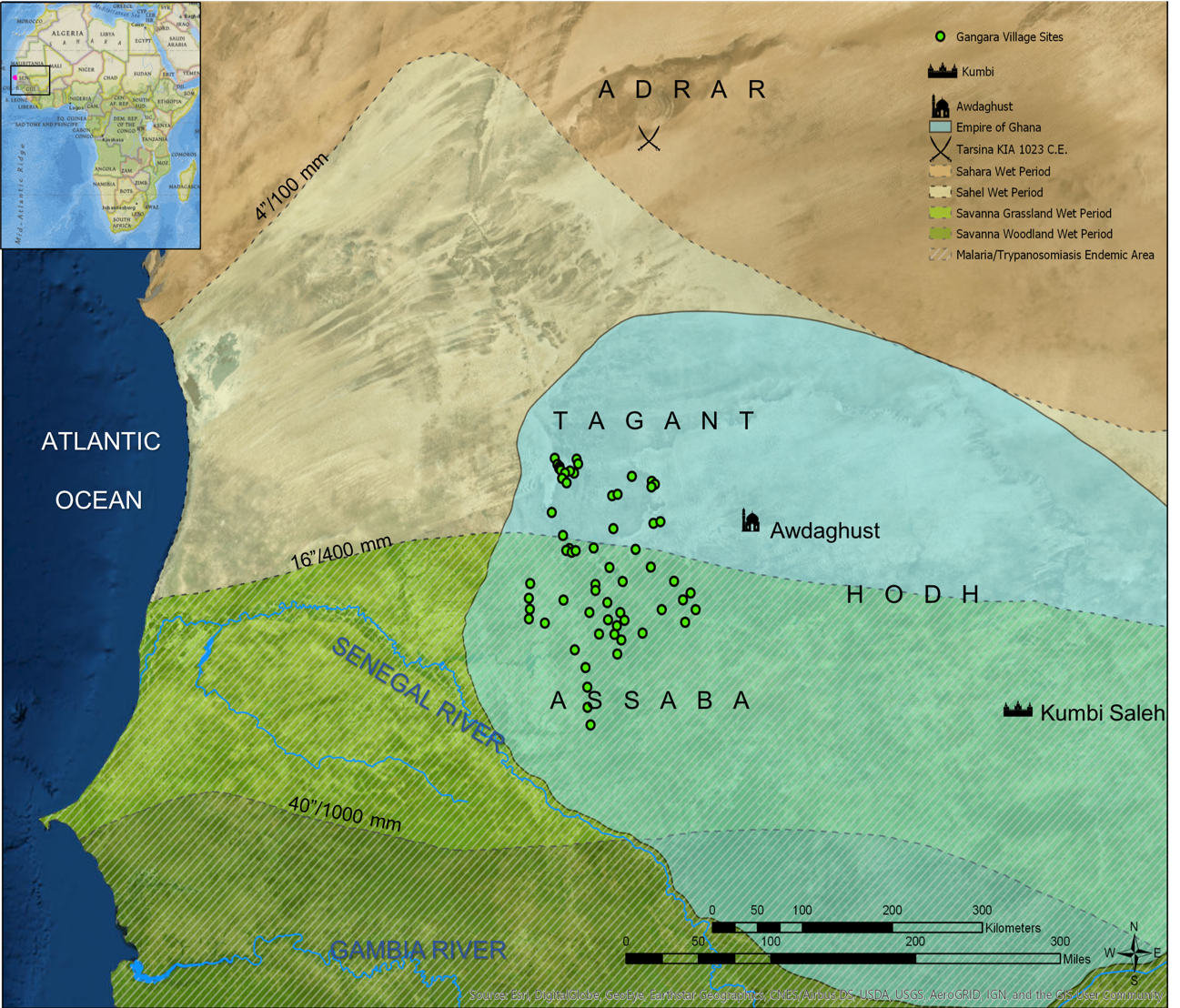 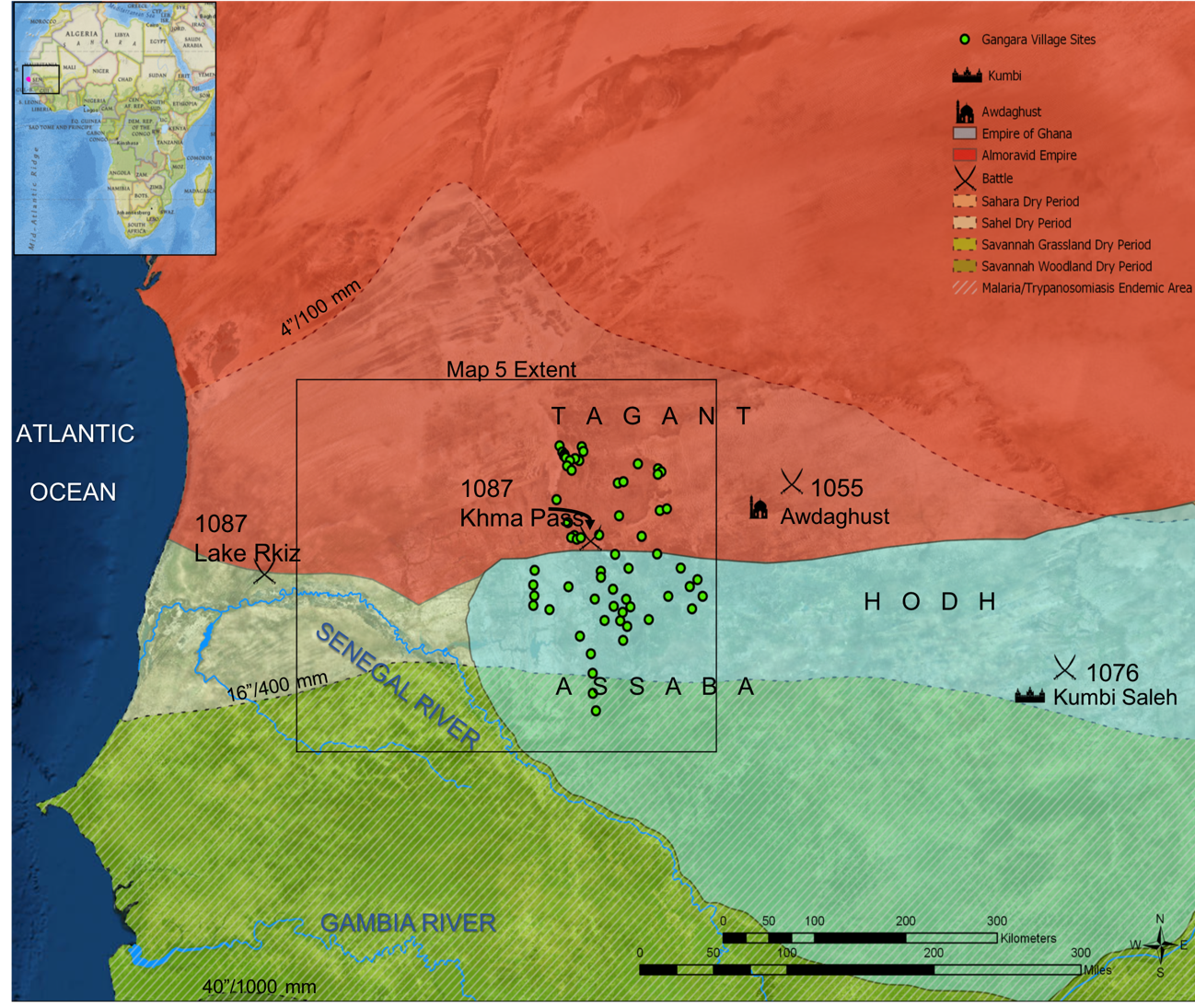 Both maps also show the correlation between climate and disease with those areas affected by malaria and trypanosomiasis symbolized with hatch marks.  Both diseases acted as barriers to the incursions of desert nomads into sub-Saharan West Africa as the Berber warriors suffered high mortality rates from malaria (p. falciparum) and trypanosomiasis (sleeping sickness) decimated their camels and horses.

If the model holds true, then as the climate dried out during the 11th century C.E. and the ecological zones moved south, then the frontier of violence between the Berbers and Ghana should have shifted south as well putting military pressure on those populations to move south. The rise of the Berber Almoravids, a militant Sunni Muslim reform movement, dominates the history of the region during the latter half of the 11th century.  In the year 1055 C.E., Almoravid forces conquered Awdaghust and over the next two decades, they fought to "pacify" the south.

All but the most southerly of the Gangara sites suffered from both Almoravid raids and the drier climate making rain-dependent cereal farming impossible in many of their former settlements. While the Gangara sites in the Tagant and Assaba highlands are the most likely candidates for places settled by the ancestors of the Lebu there is still a large spatial gap between those settlements and the known Lebu sites along the Senegal River valley. River valleys flowing south out of the once green Sahara were natural conduits for population movements as even dry riverbeds would have greater amounts of moisture for longer periods of time than areas outside of the river valleys. I argue that such pathways enabled the ancestors of the Lebu to more easily migrate to the south. By overlaying a hydrographic map of watersheds on the region (Map 5), it is easy to see how the majority of Gangara sites were linked to the Senegal River valley and later Lebu sites by paleochannels and seasonal watercourses. In Daveau and Toupet's archaeological study of the Gangara, they relate a Soninke oral tradition recorded in Selibabi that claimed that their ancestors had followed similar paths from their ancestral hilltop village of Gandega to their current location along a dry riverbed that feeds into the Senegal. The next part of my research project maps the Senegal River Valley in the 12th and 13th centuries as the Lebu spread downriver.  I will be mapping the legend of Njajaan Njaay, the culture hero of northern Senegal, as a metaphor for the development and movement of societies and political centers of power downriver over time.