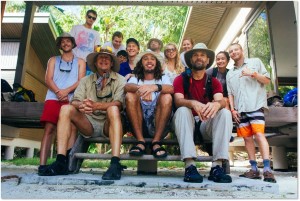 Beginning in the May Term of 2011 and continuing every few years, a team of students and faculty from the University of Redlands, supported by the Center for Spatial Studies, traveled to French Polynesia to study applications of Environmental Science on an atoll called Tetiaroa. The team’s objectives were to study one of the last ground nesting bird populations on earth, as well as gain understanding on island morphology. The University of Redlands (UoR), working closely with the Tetiaroa Society (the non-profit land trust for Tetiaroa), is building a geographic information database for the atoll.

The Tetiaroa Atoll is situated in the middle of the South Pacific Gyre and is part of the Society Islands of French Polynesia. It is about 50km from Tahiti, its nearest high-island neighbor. Small enough to lend itself to comprehensive marine biological resource inventories, the entire atoll is about 5 km2of low-island terrain situated around a 12km2lagoon. 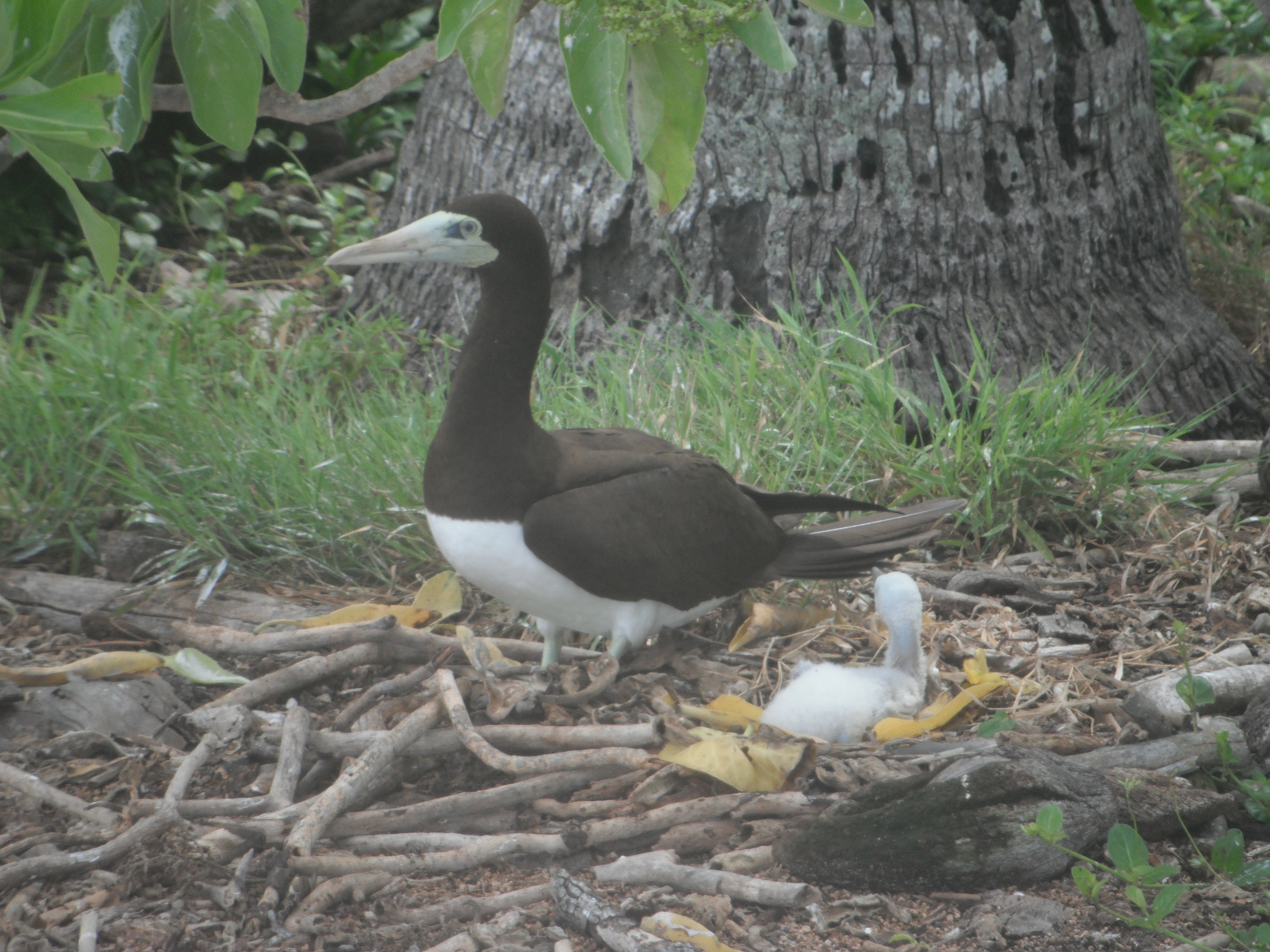 One motivating factor of the 2014 research was the fate of a ground-nesting bird population on the predator-free small island of TahunaIti. The team’s main concern was whether rats from its rat-infested neighbor, Rimatu’u, had crossed the narrow channel to prey on the birds. Based on historic imagery and a GPS delineation performed by University of Redlands students in 2011, the northwest sandspit was dangerously close to connecting the two islands

A comprehensive bird census of Tahuna Iti was done to identify any signs of predation and generate a baseline for future research. Specifically, the ground-nesting birds included the Brown Noddy, Red Footed Booby, and the Black Noddy. Fixed-radius point counts were used to estimate the number of eggs laid by the bird populations. A point was collected using a Trimble GPS unit to mark the bird census’ as well as record signs of predation.

Due to the general circulation of the Earth, focusing on the SE trade winds and ocean currents, we can observe the erosion on the southeast side of Tahuna Iti, with sand being deposited on the north and northwest sand spits. The continual collapse and growth of these sand spits from south to north results in the motu shifting approximately one meter per year.

The team used kite aerial photography (KAP) to create a high-resolution, composite aerial photograph of the islands. The goals for the KAP was to further record the shoreline as well as reinforce egg counts through high resolution low flight images. The KAP mission used a Pentax Optio WG-2 GPS camera mounted on a 2.7m diameter delta kite and obtaining the ground control points using a Trimble GeoXH 6000 GPS data logger. 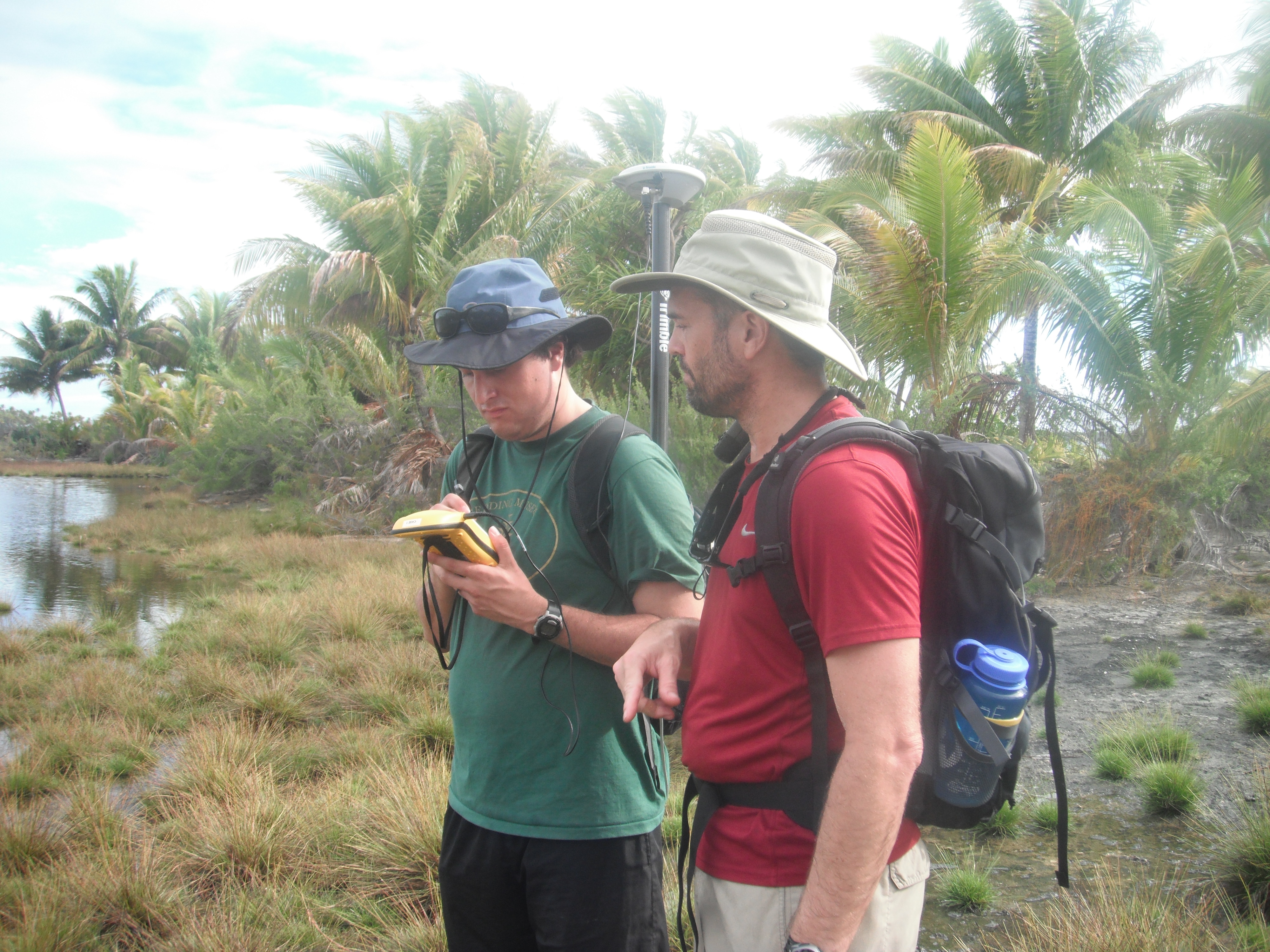 The team used Trimble GeoXH 6000 GPS to repeat shoreline delineations taken in 2011 when the team last visited Tetiaroa. Recent aerial imagery taken in 2010 and 2012 further indicates the windward erosion and leeward deposition of sediments, showing the movement of sand spits on the leeward shoreline of Tahuna Iti toward its neighbor island—Rimatu’u. If these processes of windward to leeward erosion continue, there is a very real risk that Tahuna Iti may be connected across the narrow channel, providing a land bridge for rats to cross from Rimatu’u and destroy the ground-nesting bird colonies on the island.

The team determined that the birds had not been exposed to selective predation that would have promoted defensive behavior. The team concluded that if the rat population on neighboring motu Rimatu'u were to cross one of the sand spits extending from motu Tahuna Iti, they would quickly decimate the ground-nesting bird population. As wind and sea erosion continues to push sediments from the southeast side of motu Tahuna Iti to the northwest sand spits, the gap between Tahuna Iti and Rimatuu is likely to close, putting the ground nesting bird population at increasing risk from predation.

In the spring of 2021 Professor Tim Krantz and CSS staff member David Smith will travel to the Tetiaroa Atoll to conduct a visible and near infrared UAS (drone) survey of a few selected motus (islands) within the atoll.  The purpose of this work is to establish ground-based reference points to identify vegetation types and determine the spectral signature for the plant communities with in the atoll. The final product will be a vegetation map of the Tetiaroa Atoll.