After taking a faculty position at the University of Redlands, Dr. Rebecca Lyons involved her environmental chemistry students in testing for trace pollutants in the lakes around Redlands. Largely “by mistake,” they found 4-nonylphenol (4NP) (an endocrine disruptor) everywhere.  Her search for "control" lakes with no 4NP pollution engaged undergraduate students in using GIS, chemistry, and statistics to solve a spatial mystery. 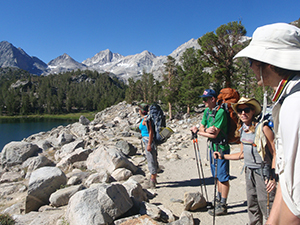 Dr. Rebecca Lyons conducts research with undergraduate students on the distribution of trace nonpolar pollutants such as endocrine disruptors—remnants of herbicides, pesticides, fertilizers, and other industrial products—that mimic the activity of hormones in humans and animals.

The effects of endocrine disruptors on animals can be quite dramatic: birth defects, deformation of sexual organs, sex changes in individuals, and development of intersex characteristics have been documented in the wild.

After taking a faculty position at the University of Redlands, Dr. Rebecca Lyons involved her environmental chemistry students in testing for trace pollutants in the lakes around Redlands. Largely “by mistake,” they found 4-nonylphenol (4NP) (an endocrine disruptor) everywhere. 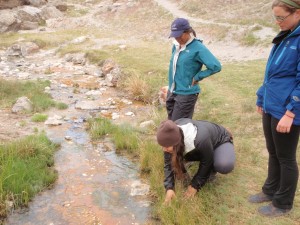 Searching for a control lake to use for comparing the Southern California lakes, the researchers turned their attention to lakes in the High Sierra Mountains of California. They found some High Sierra Lakes to be free of endocrine disruptors, but not others. This observation led Dr. Lyons and her students to embrace spatial thinking to generate hypotheses about why 4NP exists in some areas and not others.

"We knew that the pollutant was coming from somewhere far away," said Dr. Lyons. "California's highly agricultural central valley was the likely source. 4NP is aerosolized during pesticide application in the fields."

This observation led Dr. Lyons and her students to speculate about how 4NP was transported to lakes in the Sierras and why some lakes were receiving the pollutant and others were not.

"The first question, transport, was easy," said Dr. Lyons. "Prevailing winds across the central valley can carry dust and other particulates hundreds of miles to the east. So, it was simple to imagine 4NP being carried aloft from agricultural fields in the valley and winding up in the Sierras to the east."

The harder question, according to Lyons, was speculating why 4NP was being deposited in some High Sierra lakes and not others. "That question," said Lyons, "took some spatial sleuthing."

Lyons and her students hypothesized that the rugged topography of the Sierra Nevada Mountains sheltered some lakes from 4NP deposition while leaving other lakes exposed. To test this hypothesis, a sheltering statistic was developed and applied to field data gathered by students in Dr. Lyons lab. 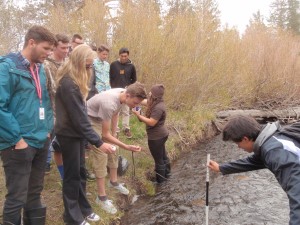 Dr. Lyons and two of her students, Kyle Van de Bittner and Sean Morgan-Jones, shared their research in an article published in the peer-reviewed journal, Environmental Pollution. Entitled "Deposition patterns and transport mechanisms for the endocrine disruptor 4-nonylphenol across the Sierra Nevada Mountains, California," the article advances the use of spatial tools in environmental chemistry and provides strong testament to the sophistication that undergraduate researchers can achieve.

According to one of Dr. Lyons' students, "The use of a spatial perspective did in fact change how I saw chemistry. From this perspective I was able to see how the different chemical laws and concepts overlapped in real world practical applications."