When studying the Holocaust, particularly first-person survivor accounts, we inevitably encounter spatial questions of perspective, scope, and scale. In accounts such as those by Primo Levi, Charlotte Delbo, and Elie Wiesel, to name a few, we see a radical contraction of time and space on one level: from the relocation of entire communities to circumscribed ghettos (within mere days, sometimes overnight), to the seemingly endless time of transports in packed, airless cattle cars (days, sometimes weeks), to the total disorientation upon arrival at concentration camps, to the exceedingly regimented life in the camps, what some survivors experienced as the reduction of space to one’s own body, and in that body’s monotonous, repetitive tasks, the obliteration of time itself. And yet at the same time, the Nazi genocide also took place across an entire continent, crossing national borders, establishing new zones of occupation, and reconfiguring Europe—transforming its rural and urban landscapes, its transportation routes—according to the militaristic map of Nazi domination, to create over 40,000 sites of internment.

In Dr. Oster’s ENGL 334 class, students map these multilayered spatial dimensions of Holocaust geography using GIS tools to see just which aspects of the individual survivor story can, or cannot, be visualized or mapped. Using an interdisciplinary approach, Dr. Oster introduces students to a variety of questions, methods, and resources through which to explore the subjects of Holocaust persecution, dislocation, internment and torture, survival, testimony, and memory. Students investigate literary questions of representational and rhetorical technique: how Holocaust survivor accounts lead us to interpret language enmeshed in structures of power, witness traumatic violence, and imagine the affective experiences of pain, terror, and loss that exceed representation. 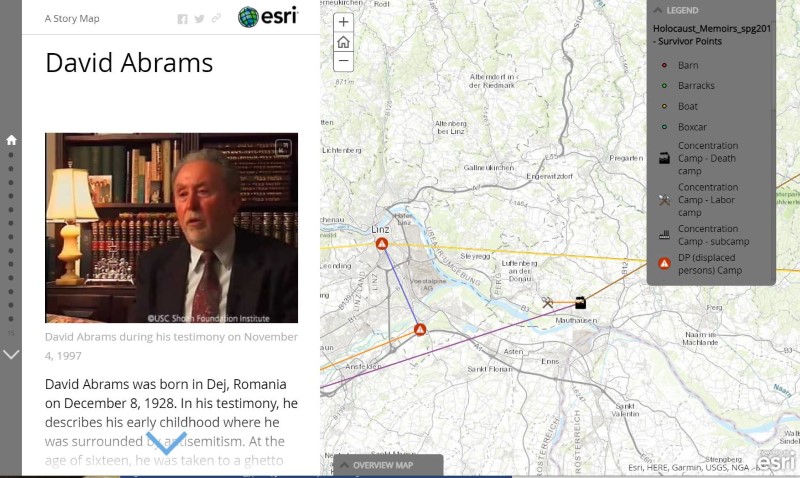 Using ArcGIS and Esri StoryMaps, students in groups then create a geo-referenced visual representation of one Holocaust survivor’s forced journey, based on intensive study of their video testimony from the USC Shoah Foundation Video History Archive. Students explore that person’s story as a narrative that occurs in time and space, from birth and childhood through the start of WWII, arrest and internment in various stages, liberation, aftermath, then subsequent life, focusing on meaningful places of memory. Using hands-on digital mapping tools, students place the individual narrative in a broader context, juxtaposing memory alongside history of specific places. In doing so, students experiment with voice and perspective, and explore the scope and multiple scales of genocide, from forced ghettoization, to continental transport, to internment in labor and concentration camps across Europe. 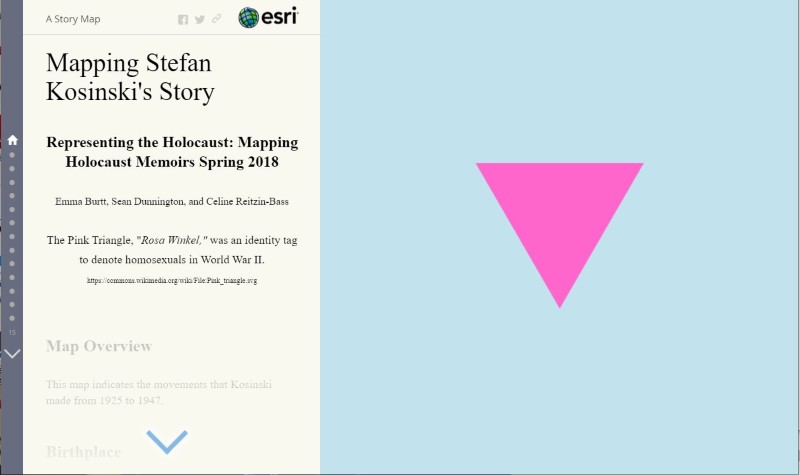 Students study stories of Jewish people, as well as gay men, lesbian women, Roma, Sinti, and agents of resistance. In doing so, they become attuned to the spatial dimensions of memory, and grapple with how to map traumatic and incomplete memories that defy the very process.