Mapping The Green Book: A Historical Geography of Segregation and Racism 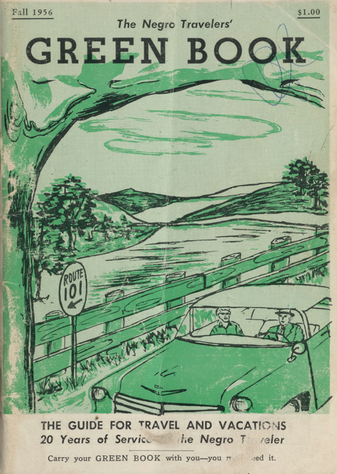 The Negro Motorist Green Book was first published by Victor Green in New York in 1937.  Aside from the title, there is nothing explicitly in that inaugural edition that mentions segregation.  Rather, the guide focused on automotive care and maintenance and included advertisements for businesses in New York and New Jersey.  The following year’s edition, however, was more direct in presenting itself as a means to help African-American travelers navigate a deeply segregated nation.  The introduction to the 1938 edition included a letter from a reader who referred to the publication as “…a credit to the Negro race” and “badly needed.”  The letter also stated that “Prior to the book, motorists only had word of mouth to rely on” and that “The Green Book will mean as much, if not more, to us as the A.A.A. means to the white race.”  That year’s edition expanded to cover most of the states east of the Mississippi River and promised that the 1939 edition would also start to cover the western United States as well.   The range of businesses covered by subsequent editions included barber shops, restaurants, taverns, taxis, pharmacies, night clubs, theaters, and more.  The 1948 edition was even more explicit in its intention to spare its readers from “running into difficulties, embarrassments” and cited a similar publication for Jewish travelers to alert them about places that “are restricted.”  That year’s edition also stated, hopefully, that “There will be a day sometime in the near future when this guide will not have to be published.  This is when we as a race will have equal opportunities and privileges in the United States.  It will be a great day for us to suspend this publication for then we can go wherever we please, and without embarrassment.”  The last edition of The Green Book was published in 1967.

In the spring of 2022, history professors Kathy Feeley and John Glover, supported by Lisa Benvenuti from the Center for Spatial Studies, will be offering a hands-on mapping course that will begin to map the 25 editions of The Green Book.  While attempts have been made to map single editions of The Green Book this will be the first in-depth application of historical GIS to the entire run of the travel guides. Contrary to public misperception, segregation was not just a Southern problem. Led by Professor Feeley, the students in the class will gain an understanding of the major trends and issues concerning 20th century African-American history to provide historical context and analytical frameworks for the mapping work led by Professor Glover.  Digital editions of The Green Book that are available to the public via the New York Public Library and U.S. Library of Congress websites will be used to collect and organize the data.

Students in small teams will create a database for each edition and execute the maps in ArcGIS Online where they can carry out basic spatial analyses and integrate different layers of modern socio-economic and demographic data.  The database will allow researchers to map variables such as the year, state, city, address, and name of the business and/or owner.  The names of some of the businesses will allow us to identify female-owned establishments and the year variable will allow us to examine changes over time.  The types of business listed in The Green Book run the gamut from hotels, tourist homes/guest houses, restaurants, taverns, barber shops, garages, beauty parlors, service stations, road houses, sanitariums, beauty culture schools, night clubs, liquor stores, drug stores, tailors, taxi cabs, drug stores, trailer parks/camps, to automotive parts stores.

The databases will take the form of spreadsheets that can be easily imported into ArcGIS Online or ArcGIS Pro and be endlessly manipulated and combined to accomplish research into the spatial history of segregation in the U.S. Using their knowledge of the historical context, students will also pursue independent research projects utilizing the data that they have collectively prepared.  Possible research topics could include mapping specific states or cities across time, analyzing specific kinds of businesses, the prevalence, or not, of female-owned businesses, etc.  The final research projects will be presented in Story Map format.