U of R’s University Village project update and important development

To:  University Community
From:  President Krista Newkirk
Subject:  From the President: U of R’s University Village project update and important development

As many of you know, the University in conjunction with its Board of Trustees has been working for many years on plans for a University Village on our land around the Arrow line rail station. We are excited to share with you a conceptual rendering of the development below as we are finalizing our documentation to move forward with the selected developer. 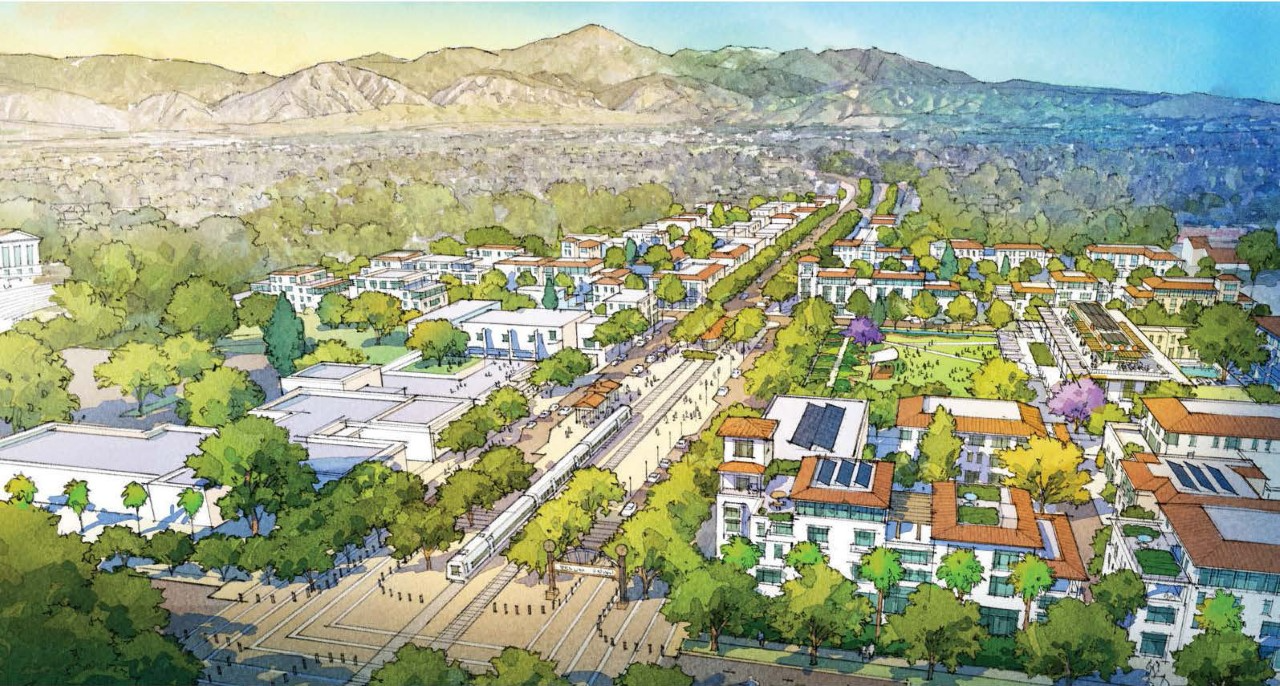 The University Village is envisioned to be a sustainably developed, transit-integrated neighborhood with green space, retail, restaurants, a boutique hotel, and a mix of housing types. It is designed to be a beautiful, walkable, and inviting space that will help to recruit students, faculty, and staff. In short, it is the destination spot we have long envisioned.  It includes a zanja feature that will help to contain and abate storm water to mitigate flooding that has historically impacted the city of Redlands, including downtown. There is even a planned childcare center.

As you will remember, this project was developed with input from University community members and local residents through a neighborhood survey and public charrettes. The comments from these forums were incorporated and made the concept of this project better and more community-friendly.

Normally, we would unveil this concept to you in a public forum and celebration; however, a recent ballot initiative has been proposed through a citizen petition, and the provisions of this ordinance, if passed, threaten this long-planned development. The proposed measure seeks to limit building heights in the University and Downtown Transit Villages to three stories and 40 feet, while permitting three other transit villages in Redlands to build to four stories and 52 feet (see summary by City attorney). The proposed University Village development includes some buildings (approximately 30% of the buildable site) with four stories. None of those buildings are near existing residential communities. The population density in this plan is necessary to make this development, with its open spaces including a Village Green, financially viable.

This development is critical to the future of the University. It will attract prospective students, faculty, and staff; add an important revenue source; and help keep tuition affordable.

A team from the University will be advocating for our position against the proposed measure at the upcoming City Council meeting on Tues., Aug. 3. If you would like to help us protect the University’s future, I invite you to join us there. The public meeting begins at 6 p.m. in the Council Chambers, 35 Cajon St.; we’ve been advised to arrive by 5:30 p.m. since a full house is expected.

I also invite you to ask questions about University Village or raise it as a topic of conversation at our Faculty and Staff Town Hall on Friday, August 13 at 1 p.m. or our Student Town Hall on Friday, September 17 at 2 p.m., both in Orton Center.  You can register to attend either of these events, which will be held in person and via Webex, on the Events with the President website. You can also reach the President’s Office at PresidentsOffice@redlands.edu.

For additional information on the University’s position, University Village, and our recommended next steps for City Council, please see the FAQs below.

Does the University of Redlands have a position on the recent initiative to cap building heights in the University and Downtown Transit Villages to three stories, while permitting those in transit villages at Alabama, California, and New York Streets reach four stories?

Yes, the University of Redlands strongly opposes the initiative limiting options for future development around the University Transit Village to three stories.

Would the new restrictions interfere with the University’s current plans?

What is the vision for University Village, and how will it benefit the residents of Redlands?

This sustainable, transit-integrated neighborhood is envisioned as a new town-gown village center that includes diverse housing types, retail and restaurant destinations, a boutique hotel, and entrepreneurial office and work-live spaces that would benefit all Redlands residents. Developments like this eliminate urban sprawl that harms the environment and costs the city more in maintenance and support. In addition to sustainably adding amenities, creating jobs, generating revenue and limiting expenses for the City, the live-work-play-do environment in the Village will provide Redlands residents with a new Village Green—a public gathering space for the University and greater Redlands community, offering special events, farmers’ markets, seasonal celebrations and more. Initial input on conceptual designs for University Village was gathered from area residents and community members through a fall 2017 questionnaire and series of workshops. The University is currently in the final stages of selecting a developer for the project.

How do open spaces and multi-story buildings complement each other in University Village plans?

The substantial open space in this vision of University Village is made possible by a mix of two-, three-, and four-story buildings (with appropriate scale and setbacks from adjacent properties and main streets) on the larger site. Due to the ample public and landscape spaces and tiered construction with lower heights adjacent to single-family residences, structures with a fourth floor would cover only about 30% of the total buildable site.

Why are four-story buildings essential to the realization of University Village?

University Village requires an infrastructure investment currently estimated at $80 million simply to ready the area for development. With the elimination of 4th floors from building plans, the project would lose an estimated $54 million in value, making it unlikely the University could attract a developer to partner on this promising project.

Why is University Village key to the future of the University of Redlands?

A vibrant University Village will help attract and retain University of Redlands faculty, students, and staff, who increasingly desire a walkable and transit-connected neighborhood around the main campus. This development will provide an additional revenue stream for the University that will ease the pressure to increase tuition and thus help keep tuition affordable for future students. Finally, with a projected decline in the number of college-age students across the country, the development of University Village will help ensure the University survives and thrives as part of the city of Redlands well into the future.

Are you planning to use the same developer for University Village as the developer selected for the downtown mall?

No, a different firm is under consideration.

Does the University of Redlands have a position on the timing of a ballot on the proposed measure restricting development?

Yes. If a vote is held on the new initiative to cap building heights in Transit Villages, it should be placed on the ballot in November 2022 as part of the next general election, rather than holding an earlier vote via special election.

What are the advantages of placing the measure on the ballot in the November 2022 general election rather than holding a special election?

The many compelling reasons to opt for the general election include: