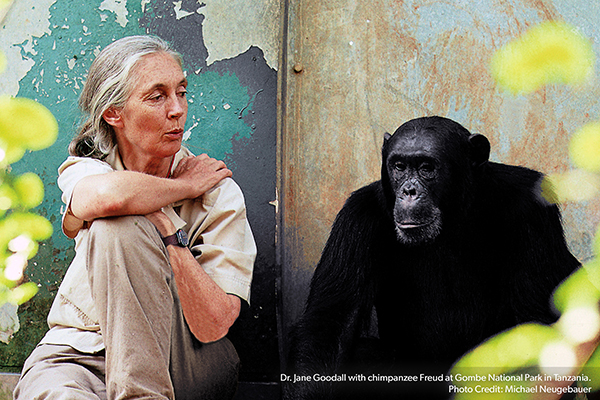 It was highly unorthodox in 1960 for a woman to venture into the African forest and study chimpanzees. Yet, that is how Dr. Jane Goodall spent her summer that year, realizing her childhood dream and having no idea that her work would someday redefine the relationship between humans and animals.

Goodall, a world-renowned conservationist, ethologist and UN Messenger of Peace, is best known for her landmark study of chimpanzee behavior in what is now Tanzania. She defied scientific convention by giving the Gombe chimpanzees names instead of numbers, and insisted on the validity of her observations that animals have distinct personalities, minds and emotions. Her work at Gombe Stream would become the foundation of future primatological research and redefine the relationship between humans and animals.

In 1961, Goodall entered Cambridge University as a Ph.D. candidate, one of very few people to be admitted without a college degree. She earned her Ph.D. in ethology in 1966.

In 1977, Dr. Goodall established the Jane Goodall Institute, which continues the Gombe research and is a global leader in the effort to protect chimpanzees and their habitats. The Institute is widely recognized for innovative community conservation and development programs in Africa and Jane Goodall’s Roots & Shoots, the Institute’s global environmental and humanitarian youth program.

Goodall started Roots & Shoots with a group of Tanzania students 25 years ago and today the program involves hundreds of thousands of young people from preschool through university in more than 130 countries.

Goodall last visited the University of Redlands in 2011 when she addressed a sold-out audience in the Memorial Chapel and joined in the local Roots & Shoots program, run by University of Redlands Community Service Learning. Today, Goodall travels nearly 300 days each year, inspiring action on behalf of endangered species, particularly chimpanzees, and encouraging people to do their part to make the world a better place for people, animals and the environment we all share.