“We deeply missed hosting in-person Homecoming festivities last fall due to the COVID-19 pandemic,” says Vice President for Advancement Tamara Josserand. “It was clear from the weekend’s record turnout how much our Bulldog community wanted to come together.” 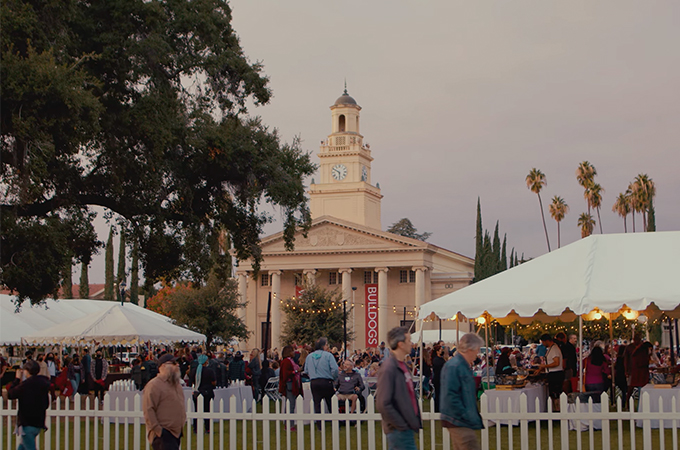 The weekend, which marked the 100th anniversary of the “Och Tamale” chant, started on Friday afternoon with the Celebrating Endowment and Legacy Luncheon in recognition of the contributions of those who have established endowed funds and legacy gifts at the University. More than 250 endowment donors and beneficiaries, as well as Cortner Society members, were in attendance.

As part of her first U of R Homecoming weekend, President Krista Newkirk gathered for dinner with 420 graduates from the Classes of 2020 and 2021 in the Alumni Greek Theatre. Jacob Miner ’20 spoke, along with Sabrina Nunn ’21, both of whom served as Associated Students of the University of Redlands (ASUR) president during their senior years.

“No amount of virtual gatherings or happy hours can compare to the feeling of the hugs we’ve shared today,” said Miner. “I’m so excited that we’re finally back here to be Bulldogs together again and see this institutional community revived to its full vibrant potential.”

Other events throughout the weekend included reunions for the Classes of 1960, 1961, 1965, 1966, and 1971 (some of which were originally scheduled for 2020); lunch at the SURF Garden; a humanities reception; a parent/family coffee; the School of Business VIP tent; a School of Education reception; various Bulldog athletics gatherings; and “Black N The Day” roller skating and line dancing sponsored by BSFSAA.

Greek organizations also held special events, including Beta Lambda sorority’s celebration of its 100th anniversary. “Never in my wildest dreams could I have imagined the turnout to recognize this incredible milestone,” said Karen Knudson Wilson ’92, ’94. “Though it wasn’t what we originally planned [due to COVID-19], our Centennial Committee pulled off an amazing weekend that safely brought so many together to celebrate 100 years of Beta Lambda. The friendships made at the U of R are ones we truly cherish, then and now.”

Exciting announcements: a New School of Business & Society and the Lightbody Matching Challenge

Guests at Saturday’s convocation were welcomed by the president. “‘Coming home’ certainly has a different meaning for all of us,” said Newkirk in the Memorial Chapel. “I recognize Homecoming is a little sweeter, a little more poignant this year. … As we continue to celebrate all that makes the University of Redlands great, never again will we take for granted the opportunity to come home.”

At the convocation, Newkirk announced the launch of the University’s new School of Business and Society, joined by Senecal Endowed Dean of the School of Business and Society Thomas Horan and Interim Dean of the College of Arts and Sciences Steve Wuhs. “We recognize that today’s businesses face issues that always involve broader societal considerations,” said Newkirk. “We want to ensure our business students are conscious of their roles and responsibilities as members of our broader society.”

Newkirk later broadcast the generous Lightbody Matching Challenge, launched to help increase donor participation as the Forever Yours campaign comes to an end this December. The challenge will match dollar-for-dollar, up to $2,000, every gift to U of R from a new campaign donor. Five alumni awardees also were recognized, and Leslie Sernaque Falcon ’21 read a poem she wrote.

The annual Homecoming Dinner on the Quad was one of the University’s largest ever, with more than 2,200 guests. “It was so nice to see everyone again,” said Wenmei Bai ’21, who traveled from Las Vegas to attend the weekend. “It almost felt like the school events we had pre-pandemic. Everything was really well done.”

Watch the Homecoming video and learn more about upcoming events from Alumni and Community Relations.