On March 23, the University of Redlands presented its first TEDx event, organized by a student committee to expand academic horizons on campus. The sessions, which consisted of short, powerful talks of 18 minutes or less, showcased speakers with talks with titles from “Disney and Student Development Theory” to “Can You Hold My Leg?”

Here are a few excerpts. 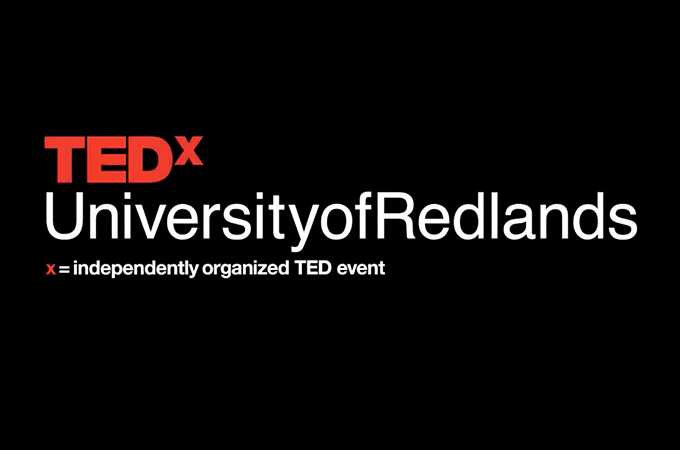 “What if we, as educators, mentors, and leaders, made a commitment to ourselves to remain teachable and self-reflexive? Knowing that when we have access to our voices, our truths, we can provide a space for our students to do the same.”
—U of R School of Education Professor Mikela Bjork in “Access to Self: The Radical Power of Self-Reflexivity”

“I’m not here to say, ‘You should have gone into physics,” but don’t lose sight of that curiosity, that wonder you had when you were, say, four years old, and the first time you saw snow, you wondered, ‘What is that?’”
—U of R Professor of Physics Eric Hill in “Beautiful Data”

“Growth, identity, development… It doesn’t end—we don’t just finish one day. It keeps going, it’s recursive. …. We have to keep learning and working on our identity; it’s an expanding circle, really.”
“A circle, you say?”
“Yes, the circle of life.”
—Amanda Woodle ’19 and U of R Director of Recreation Andrew Hollis in “Disney and Student Development Theory”

“I found that I was hiding my depression in all of my interactions. I was so, so scared to show people that I was struggling, because I knew that with vulnerability came this possibility for judgment. … When I decided to open up, my healing started to pick up the pace. I started to become happier, and I started to get out more and stopped isolating myself. … I learned that if I just owned this part of my life, if I owned my story, others really had no choice but to accept it.”
—Summer Stafford ’19 in “Sincerity in an Age of Social Media”

“In an era in which our national monuments are being diminished at an unprecedented scale, and in an era in which citizenship is increasingly inaccessible, who we are and what we determine that by is of utmost importance.”
—Maggie Eronimous ’20 in “Defining the Common Man: Land, Music, and Nation”

“So, what is my take-home message to you? Question everything! Every time you look at a map, I want you to start asking questions: Where did this data come from? How old is this data? Who made this map? What was the message that they were trying to give to me, and do I agree with that? What are [my] assumptions … when I look at this map? And always remember: All maps lie!”
—Visiting Professor of Spatial Studies Alana Belcon in “Map Access: the Beauty and Dangers of Modern Technology”

“Where I think we need to go and the story that we need to be telling ourselves as an institution is moving from diversity to justice. … Diversity is who’s invited to the dance. Inclusion is: Are we dancing? But justice… is: Who owns the dance hall? Maybe we should collectively be owning the dance hall.”
—U of R adjunct faculty member Zack Ritter in “Challenging Status Quo Supremacy in Higher Education”

Learn more about student affairs at the University of Redlands.