The annual University of Redlands Relay for Life, one of hundreds of Relays across the country, was held at the Ted Runner Stadium last Saturday. Dozens of Bulldogs and Redlands community members braved the rare California rain to walk and raise money for the American Cancer Society.

The rain was already coming down when the event officially kicked off at 9 a.m. The University’s own Chemistry Professor Rebecca Lyons and Political Science Professor Renee Van Vechten were invited up to the stage to share their cancer survivor stories.

Lyons shared what it was like to receive her cancer diagnosis. “I just assumed I was going to the doctor for a hematology appointment,” she said. “But my doctor said, ‘What we really need to talk about is your cancer.’ And this is the power of denial: I said, ‘I don’t have cancer.’ I must have disagreed with him five or six times. I thought about all the reasons I didn’t have it. In spite of not having risk factors, in spite of living a healthy life, I still had it.”

After completing her treatment and eliminating all signs of cancer, Lyons sat down with her husband to make a list of all the mountains they’d ever wanted to climb: “We did Whitney. We did White Mountain. It just went on and on. We had the most insane summer. Here’s the message of hope: Don’t wait until you have cancer to do those things.”

Van Vechten’s diagnosis came after a routine mammogram that showed “some of my own cells had decided to go rogue without my permission.” She continued, “Genetic testing later revealed I carried the BRCA2 mutation—the gene mutation—and that helped clarify what my next steps would be. Those eventually included a couple major surgeries, a few less body parts, and a couple of new breast friends.”

Van Vechten had support every step of the way, not only from her own family, but also from her extended family at the U of R: “I was helped by my supportive colleagues, who were able to support my medical leave and ease my eventual return to full-time work. And I was healed by a community of friends and family who showed up to provide rides to doctors’ offices, and walks in the sunshine, and dinners that we didn’t have to cook at the end of those long and fuzzy days. There are countless ways for you to show up when cancer strikes.”

At Saturday’s relay, members of the Redlands Fire Department demonstrated their support by leading cancer survivors and caretakers in the first lap around the track, while Relay participants cheered them on. The day continued with free food from local businesses, activities and games sponsored by the Relay committee, fundraisers hosted by U of R organizations stationed around the track, and an abundance of walking.

Event coordinator Rebecca Matthews ’18 said that the U of R has always been supportive and dedicated to the cause. “Relay for Life, as many people close to me know, is a passion that I strive to share with all those around me,” she said. “As I typically say, Relay is my Life. Seeing students and faculty walking through the rain playing games, laughing, and coming together for a cause like fighting cancer was uplifting and a sight I will never forget.”

As for me, this was my fourth time participating in the Relay at the U of R. It’s an important event to me because 19 of my family members have been diagnosed with various types of cancer, and several have passed away. I walk for all of them every year, although I haven’t been able to beat my personal record of 20 miles set in my sophomore year. That same year, I donated 8 inches of my hair at Relay, which went to Pantene Beautiful Lengths, which provides real-hair wigs to cancer survivors, free of charge.

What is normally a 24-hour-long event was, unfortunately, shortened to 12 hours due to the weather. Despite that snag, the U of R raised over $18,000 for cancer research.

The first half of Relay usually concludes with the Luminaria ceremony in which paper bags decorated in memory or in honor of those who fought or are fighting cancer are placed around the track and lit with candles. Since the Luminaria ceremony couldn’t be performed, a separate ceremony will take place on a yet-to-be-determined date in a couple weeks.

Watch this video made in preparation for the 2018 U of R Relay for Life, which includes President Ralph Kuncl speaking on his participation in the event after cancer diagnosis and treatment. 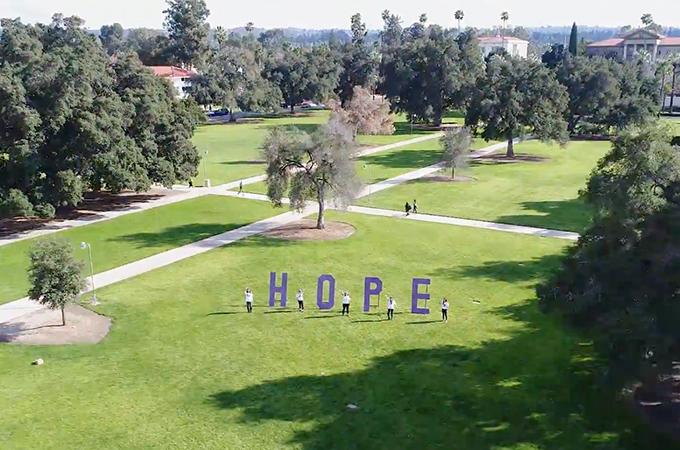 (Video by Nicholas Sousa, U of R Media Production Center)

If you are a current or entering student who would like to get involved in the U of R Relay For Life Committee or if you would like more information on the rescheduled Luminaria ceremony, email Matthews at rebecca_matthews@redlands.edu . If you are interested in student activities at the University of Redlands College of Arts and Sciences, see more information on student life.