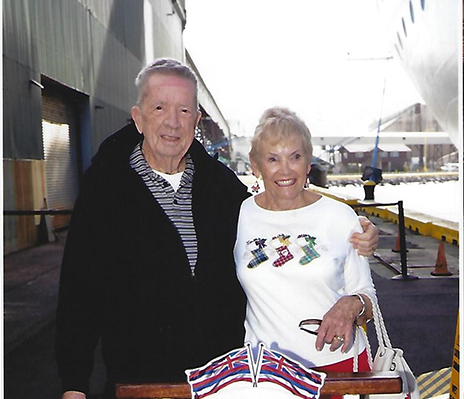 The story below is Bob’s version, not necessarily Mary Ellen's.

In 1954, around Labor Day Weekend, Bob and his roommate, Jim Lasher '55 returned to school and were on their way from Melrose Hall to get breakfast downtown.

As they drove down Colton Avenue past “U” Hall, there was a brand new Cadillac parked on the street in front of the entrance. A very beautiful woman and her mother were unloading items to move into “U” Hall. Jim says to Bob, "I know that girl, she was a classmate of my brother's at El Centro High School". Of course,
they had to stop and help. Therefore, as everyone knows, "Bob picked up Mary Ellen on a street corner in Redlands".

A week later, Redlands had its first home football game, and Bob was fortunate enough to end up sitting right behind Mary Ellen in the bleachers. One thing led to another, and Bob asked her to go with him for pizza at the Mug in San Bernardino. The rest is history. Incidentally, that was Mary Ellen’s first-ever pizza and she really liked it.

They eventually were pinned (Bob was a member of Kappa Sigma Sigma) later that year. John Atilano ’56 sang their favorite song, “Secret Love”. They eloped to Las Vegas on May 21, 1955, the weekend before finals.

At their 50th anniversary renewal of vows, their daughter-in-law-, Jeanne sang “Secret Love” again. This took place during a cruise with all 28 family members present on a beach in Puerto Vallarta. One of their sons-in-law is a minister and performed the ceremony. The whole process was a total surprise from their children.

In late May of this year, they will be blessed to have all 51 people in their direct family join them on a seven-day cruise to celebrate their 65th anniversary and they will again renew their vows, this time onboard the ship, with the same people involved in the last renewal ceremony.

"We thank God every day for the many blessings He has provided us", says Mary Ellen and Bob. "Of course one of the greatest blessings was our meeting at the University of Redlands, and our time spent there."

Cheryl and Rob’s U of R love story starts with her parents, Bill Thurman '65 and Carole Opie Thurman '65 who were both attendants in the U of R wedding of John Woodbury '65 and Bette Anderson Woodbury '66. Cheryl’s dad brought a date (not her mother) to the wedding and somehow ended up taking her mom to the airport to fly home to Illinois for the Christmas holiday. They were married soon after in August 1965. The two couples still enjoy traveling with and visiting each other.
When Cheryl started looking for colleges, U of R was not on her list but her dad continued to tell her “just apply.” Finally, as teenagers often do, she applied just to stop the reminders. She visited campus and took a class in French literature (her major was biology) and ate in the Commons. The students and faculty were so friendly. Even though U of R was her last choice, it quickly became her only choice.

Four years later, during her senior year, she was returning home from a track meet with Scott Cleland ’91and Paul Pettross ’91, when they suggested that she go to the “Spree” with their friend, Robbie Jordan ’92. She thought the weekend sounded fun so she asked Scott to help her meet Robbie. Scott said they played pool down in the basement of Fairmont Hall and she should go down there sometime. Even though she lived in Fairmont that year, she had not visited the basement except to do laundry. Bravely, she ventured down to the basement, just long enough to meet Rob. As Scott remembers, they met on the stairs between the first and second floors. Their first date was April 8, 1989, at The Spree in Lake Arrowhead. They dated for two years (long-distance) and had their wedding reception at the Alumni House in 1992. Their teenager, Tyler, often jokingly asks where Cheryl “found” his dad. She always replies, “In the basement...” 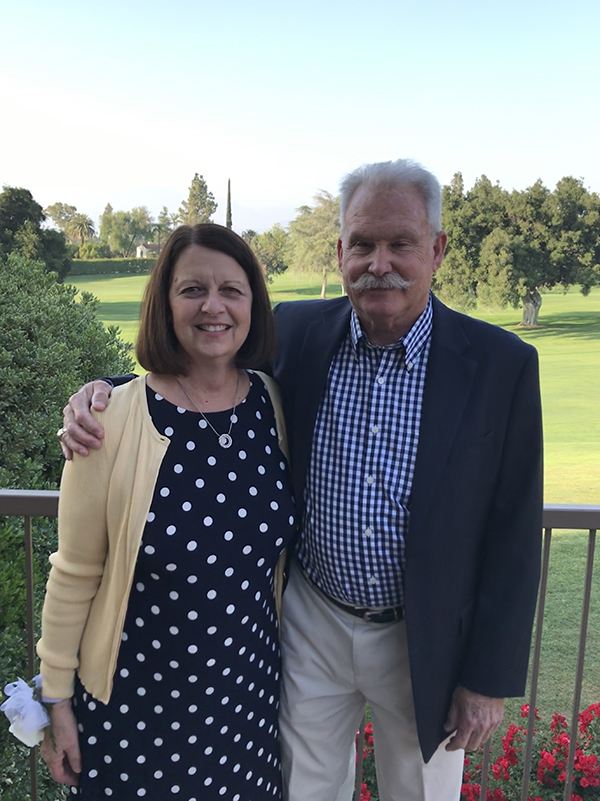 Steve and Tonia met at a Wednesday night "Stomp" in January 1975. He was a sophomore and Tonia was a freshman. Their first date was a Honk concert at the Troubadour in Hollywood. For Steve, it was love at first sight, he knew she was the one. They were engaged in November of 1977 and were married in July of 1978. They currently live in Redlands and frequently walk their dog around the Quad. They are both retired (Tonia taught for 38 years in Redlands Unified School District). Their son lives in Chicago, their daughter lives in Redlands and they have three grandchildren. 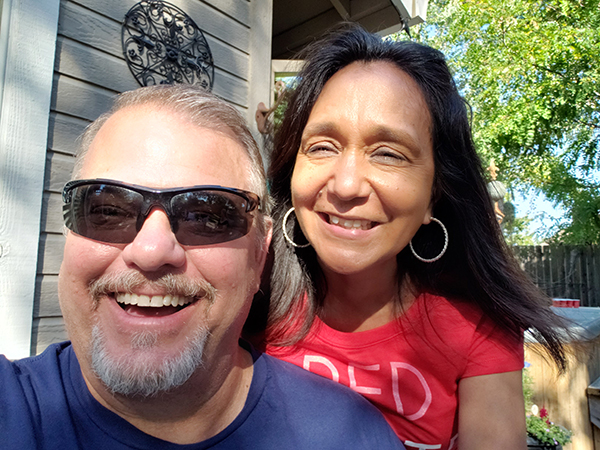 Steve met his beautiful wife Debbie Blum on November 13, 1982, on the field of Ted Runner Stadium after Redlands defeated Whittier 9-11.  They have been married 33 years and still follow Bulldogs Athletics. They stop and walk the campus whenever they are back in town.  Debbie was born and raised in Redlands and both the city and the dear 'ol U of R are some of their fondest memories. 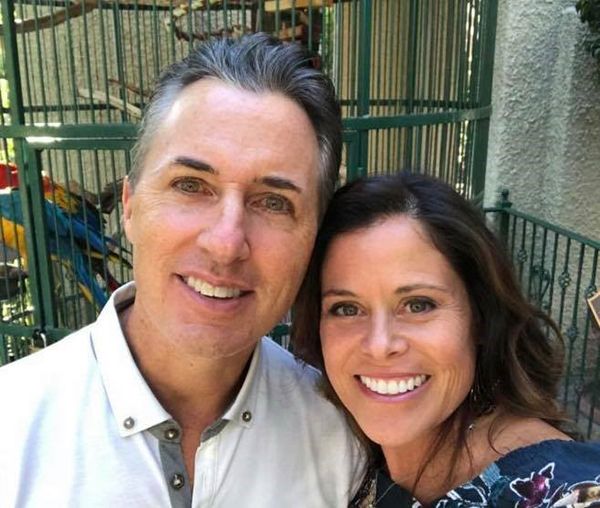 John and Melisa first noticed each other in a water safety class over Interim when John was a senior and Melisa a sophomore. It was not until two years later, after John had already graduated, that he finally summoned up the courage to ask Melisa on a date. He had returned to campus and just happened to be in the library helping a friend at the same time Melisa was there working on a project. three months later they were engaged and will be celebrating their 25th wedding anniversary this May. The take away for their boys is that your local library can very much enrich your lives… or, in their case, may even be the very cause of it. 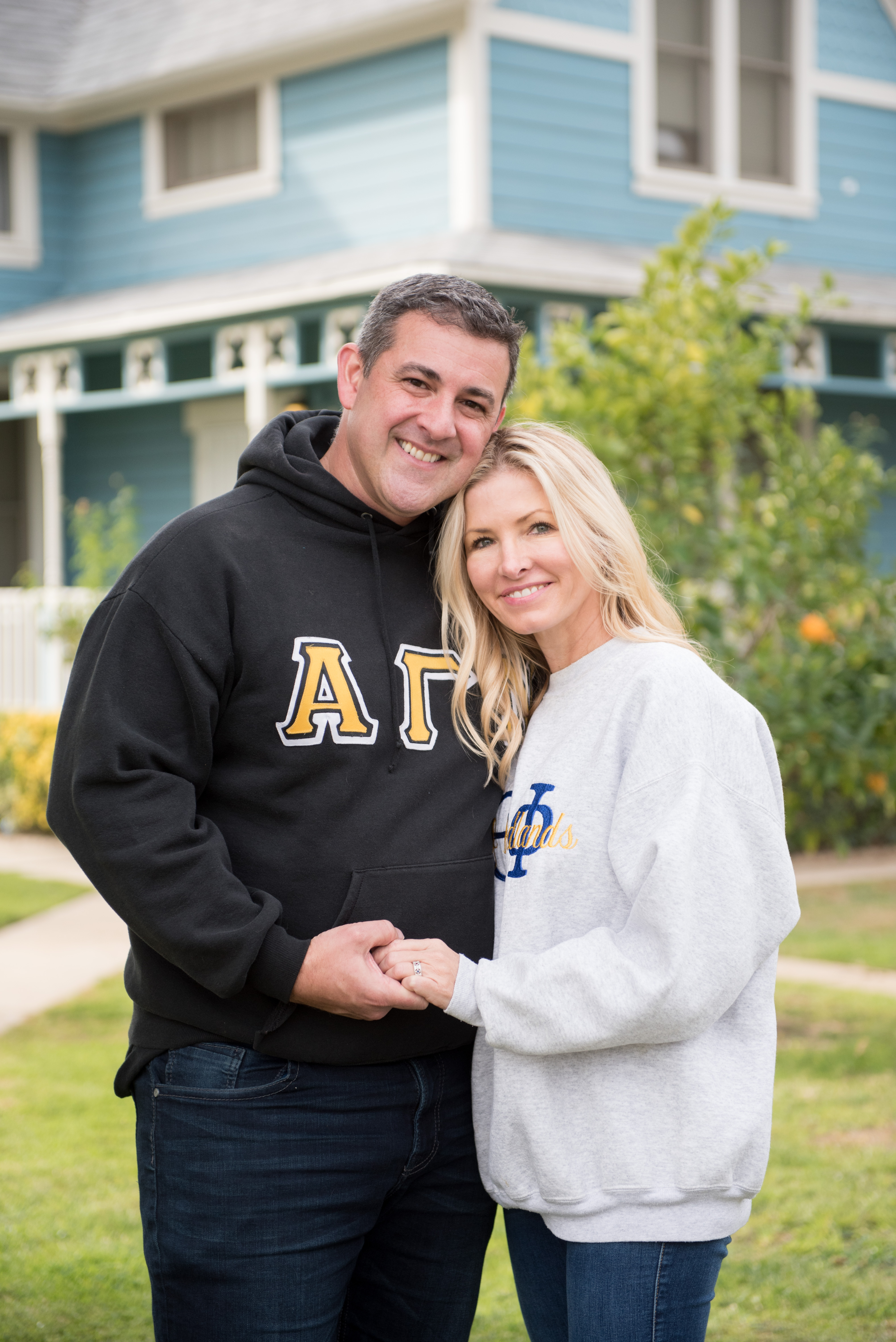 Jimmy and Danielle first met in February 1996, when Jimmy returned from his study abroad program in France. Little did they know that they were the same major at Redlands, were both in Greek organizations, and had many similar friends. In fact, Danielle had gone on two spring break trips with all three of Jimmy’s roommates and a bunch of other friends to ”the river” and Lake Havasu, only to have Jimmy show up during both trips on the day she left. Jimmy and Danielle even discussed possibly being at the same Alpha Theta Phi formal in Rosarito at the same time....to top it off, Danielle even signed up for the January 1997 interim trip to the Dominican Republic and Haiti that was partially planned by Jimmy’s family. Guess who didn’t turn in her paperwork in time and didn’t make it?

Many years passed and life kept them apart until one fateful day in December 2015 when Danielle then messaged Jimmy on Facebook asking advice about a trip to Florida.

This simple message brought about a friendship neither of them could have expected. They shared stories, texted daily, and could spend hours on the phone. A year and a half of friendship went by with daily texts, jokes, Minnesota visitations, and definite flirting. It was not until a trip to Colorado in September 2017 that things changed.

Without having to even talk about or "define" the relationship, they both knew there was something special between them. They allowed that to grow as they introduced their children and families to each other.  In July 2019, Jimmy took a trip to Oregon to meet Danielle's parents. What a blessing and perfect timing that turned out to be because just two months later, Danielle lost her father suddenly. As fate would have it, during that visit in July, Jimmy had asked Danielle’s father for her hand in marriage.

That beautiful day came  December 21, 2019, as Jimmy, Danielle, and all five of their children made a trip to Redlands to show them the campus and meet the famous bulldog mascot, "Addie." Danielle was clueless to Jimmy's proposal, but all five kids were in on it. After Jimmy asked Danielle to marry him, she said yes, and all five kids ran in for a family hug. They plan to wed at the University of Redlands in February 2021.....after all, it will be their 25th anniversary of when they first met!  If anyone has pictures of them together during their time at Redlands or Newport Beach, they are planning to give awesome prizes. 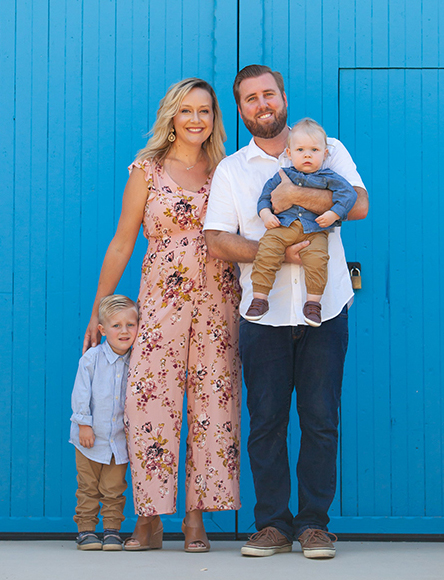 Meghan and Jared met in the fall of 2005, almost 15 years ago. Jared played baseball and Meghan was a freshman. Jared and Meghan would always happen to find each other at social events and eventually started dating. Jared continued to play baseball and Meghan became an active member of Alpha Theta Phi. After Jared graduated, he moved back to his hometown of San Diego to pursue a career in online marketing. Meghan followed him to San Diego a year after she graduated to pursue her special education credential and master’s degree. After eight years, Jared proposed to Meghan in June 2013 and they were married at the U of R Alumni House in April 2014. Since then, Jared has become a successful entrepreneur and business owner and Meghan is a program specialist for a local school district. They have two children, David (3) and Arthur (1) and they still keep in touch with many fellow alumni. 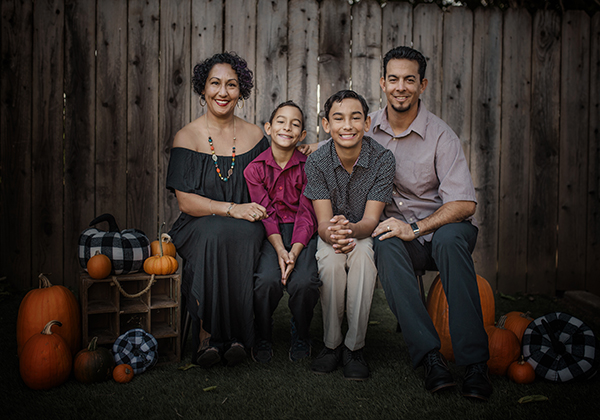 Cristina and Ben met at the dear old U of R. They were both fall athletes (soccer and football) in the same circle of friends and hit it off right away. They have been together for 18 1/2 years and married for 13 1/2. They have two awesome boys ages 12 and 9. 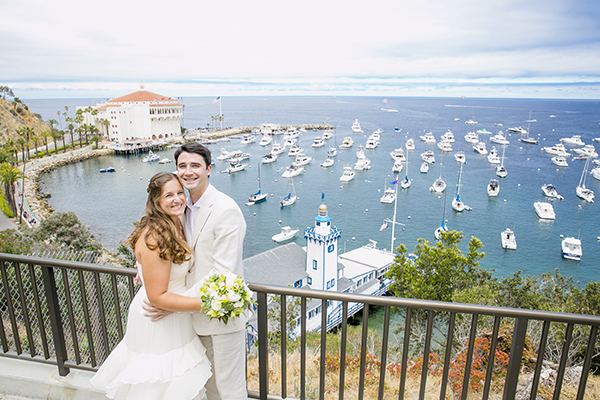 Brenna and Will met in the fall of 2009 through mutual DSP friends. Brenna invited her Beta Lambda sisters, along with some Chi Rho Psi and Delta Sigma Pi members to her family’s house on Catalina during fall break and the two had an instant connection. They shared their first kiss on Catalina, and would return years later on their wedding day to the exact spot for their “first look”. They currently live in Orange County with their adorable dog Merlin. This year, they are celebrating10 years together and five years married and will be expecting their first child in the summer. Redlands will forever hold a special place in their hearts and they are excited to raise their future Bulldog! 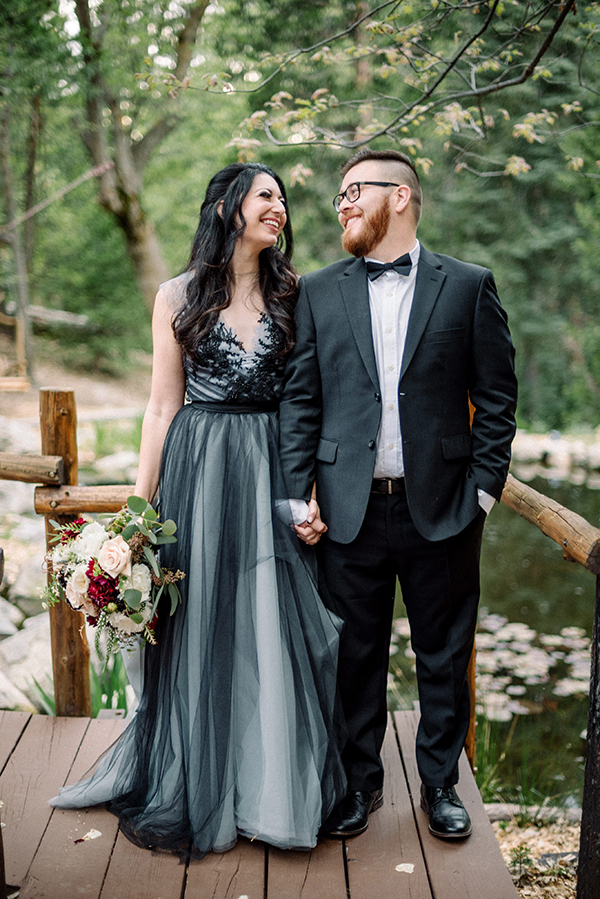 Kassandra and Dylan met at the U of R, as they were both in the same class and English majors. Somehow, they had managed to go without meeting each other until their senior year, when they had their senior capstone class together. They were both mutually impressed by the interesting research the other was doing, and they developed a friendship founded on long discussions on literature and poetry. Their friendship eventually evolved into something more, and after five years together, they were married in June 2019. Marcus and Ebony met in 2012 during first-year student orientation week. Their friendship formed after several friendly conversations. During their sophomore year, they took an interest in each other, but would not start dating until the fall of their junior year. They bonded through their love for trying new foods and exploring nearby areas like Salvation Mountain, Forest Falls, and Joshua Tree National Park.

Although Marcus and Ebony both began as students in the Class of 2016, Marcus was able to graduate one year early. He graduated from U of R during spring 2015. Marcus and Ebony remained committed to their relationship as they endured a year of long-distance until Ebony graduated the following year.

After Ebony's graduation, they reunited and Marcus began graduate school at Arizona State University. They spent the next few years exploring their new home. On the morning of July 6, 2019, during a hike in the picturesque mountains of Arizona, Marcus proposed to Ebony. Marcus and Ebony are to be married this summer